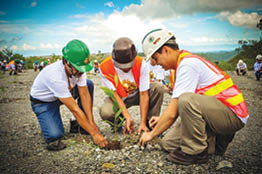 Employee volunteers help transform a barren and defoliated site into a green sanctuary that will help propagate wildlife as part of Arbor Day celebrations in Cebu (Photo courtesy Carmen Copper).

IN honour of Arbor Day 2014, and further to Presidential Proclamation No 643 urging public and private sectors to plant trees for a healthier ecosystem, the Chamber of Mines of the Philippines (COMP) and its member-companies have commemorated the planting of the local mining industry’s 20-millionth tree since 2011. The celebration has also reaffirmed the mining industry’s commitment as the country’s largest industrial forester.

The ceremony was held at the COMP-supported Lungsod Kalikasan area at Ninoy Aquino Parks and Wildlife in Quezon City with 150 key officers, company associates and industry stakeholders joining the occasion.

Since the Mining Act’s signing into law in 1995, the country’s resource development sector has institutionalized rehabilitation programs into individual business plans in active response to revitalizing the industry and implementing a parallel agenda to conserve the natural environment. Also since then, large-scale mining companies operating under the Mining Act have conducted progressive rehabilitation, including major tree-planting activities as early as the non-operational exploratory phase, in effect planting trees before mining activities even start.

According to the DENR’s Mines and Geosciences Bureau records, the Philippine mining industry collectively planted 20 million trees from 2011 to 2013. At an average forest density of 500 trees per hectare, planting activities covered an aggregate 40,156 hectares. This further establishes the industry as the country’s largest industrial planter of trees and the single largest private sector contributor to national reforestation and greening efforts.

Said to have originated 200 years ago in Spain, Arbor Day was observed as a festival through the manifesto of a local priest, don Ramón Vacas Roxo, who invoked love and respect for nature through tree-planting. Observance in North America was launched in 1872 in Nebraska where the Arbor Day Foundation was established in 1972. Today, it is observed in 40 countries worldwide.

In 2003, a special Proclamation was signed by then President Gloria Macapagal-Arroyo declaring June 25 as Philippine Arbor Day, in recognition of the need to promote a more vigorous natural environment for citizens through rehabilitation and regreening efforts. The mining industry has aligned itself to Proclamation No 643 and in the past three years has planted a daily average of more than 18,000 trees across the country, effectively rehabilitating 37 hectares on a daily basis.

Of the country’s 9 million hectares endowed with high mineral potential, only 2.7% is covered by mining permits while only 0.32% is in the development or operating stage, according to the 2011-2016 Philippine Development Plan. This translates to the equivalent of 28,800 hectares hosting actual mining or exploration, a lot smaller than the aggregate 40,156 hectares the industry has planted.

Along with the country’s growing population of close to 100 million, the resulting carbon footprint also increases. Once fully-grown, 20 million trees can potentially offset 3.9 million tonnes of CO2 emitted by 2 million small cars if each travelled an annual average of 10,000km.

Chamber of Mines of the Philippines