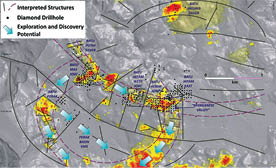 A NEW resource estimate for Robust Resources’ Lakuwahi project area on Romang Island represents a significant increase from the maiden 2012 estimate with total resource tonnes up 80%. Total gold metal is up 81%, silver metal up 152%, lead up 49%, zinc up 60% and copper up 35%.

The estimate reflects consistently positive results from intensive drilling over the past 2.5 years. It includes important new discoveries such as the Perak Basin VMS, high-grade base metals at Batu Mas Deeps and significant silver in the Batu Putih deposits.

Robust says Lakuwahi is confirming its early promise as an important and world-class deposit of precious and base metals. It also says the Manganese Project Feasibility Study is on track for completion by the end of the year with four drilling rigs active.

Lakuwahi deposit consists of at least four separate deposits within close proximity. Mineralization in all four areas outcrops at surface and in the case of Batu Perak becomes covered and well preserved from erosion, by a shallow sequence of soft, unconsolidated sediments in the Perak Basin. The basin has been the main focus of exploration drilling for nine months and has resulted in some spectacular polymetallic intersections. Most deposits remain open and there are new, untested targets that have become evident.

Definition of the resource has advanced to a stage where Robust will begin preliminary mine and process flowsheet design aimed at unlocking the considerable value inherent in the Lakuwahi deposit.

Preliminary metallurgical tests have shown promising flotation results and heavy-media (gravity) beneficiation of sulphide mineralization. Coming test work will further investigate these opportunities as well as examine variability of material types across the deposits. There are also large quantities of barite and a high purity barite by-product could be created during processing of the polymetallic ore.

Robust’s chairman David King says, “Robust remains committed to developing two mines on Romang Island. The first will be a high-grade manganese mine. Company research has shown the manganese resource is probably the best deposit for continuity and grade in Indonesia, and is the only deposit with extensive diamond drilling and a mineral resource estimated in accordance with the JORC 2012 code.

“The company is well into a feasibility study on the manganese project which I feel confident potential for a low-CAPEX, quick payback and high rate of return project, revealed by the initial scoping study.”