CHINA’S largest listed gold producer, Zijin Mining Group, says its profit in the first half of 2014 was held back by lower metal prices and higher labour costs. It posted net profit of 1.11 billion yuan (US$178.7 million), which equated to a 1.3% rise, while revenue declined 7.7% to 24 billion yuan. 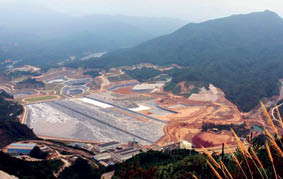 An aerial view of Zijin’s Zijinshan copper and gold mine.

CHINA’S largest listed gold producer, Zijin Mining Group, says its profit in the first half of 2014 was held back by lower metal prices and higher labour costs. It posted net profit of 1.11 billion yuan (US$178.7 million), which equated to a 1.3% rise, while revenue declined 7.7% to 24 billion yuan.

The company said in a stock exchange filing: “Product costs have risen because of higher resources tax and labour costs.” It stated that it had partly offset falling product margins by bolstering sales.

China is a low-cost producer compared with its global peers but costs have steadily risen on the back of higher wages, increased environmental requirements and tougher safety standards. To cope with falling bullion prices, some miners have increased output as a way to reduce per-unit production costs.

During a recent meeting with the China Development Bank in Beijing, Zijin’s chairman Chen Jinghe said: “Zijin owns leading technology and management in the mining industry, insists on ‘resources priority’, pays great attention to work in safety and environmental protection and clearly defines its strategic development direction which is integration of internationalization, large-scale projects and assets security. 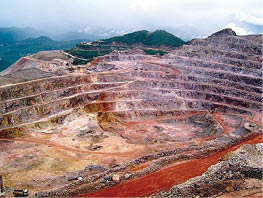 An open pit at the Zijinshan mine owned by Zijin Mining Group.

“Meanwhile, at the backdrop of current market downturn, Zijin’s steady performance reflects its comparatively good quality assets and strong competitiveness. There are a lot of potential opportunities for merger and acquisition, Zijin is aiming to complete the M&A and restructuring of large projects in the coming short period of time and gradually realize its goal of becoming a first-class international mining group.”

Chinese gold production is expected to rise 7.4% in 2014 to reach 460 tonnes, according to research firm Antaike. China’s total gold production in the first quarter rose 7.3% from the corresponding period of 2013 to 96.5 tonnes, the China Gold Association said. It also said recently that gold demand had slumped 19.4% in the first six months of 2014 from year ago but production rose strongly in the same period as miners ramped up output to protect profit margins.

Gold demand from China has slackened this year as a 28% tumble in 2013 prices, the first annual decline in 13 years, dented consumer confidence in the precious metal as an investment tool. Lower demand is also partly due to huge purchases last year as the drop in prices prompted many to bring forward their purchase.