EAST Asia Minerals has received positive initial results from metallurgical tests of samples from its Sangihe Island exploration licence. The samples were taken from a 2013 drill program at the Binebase and Bawone mineralized zones. 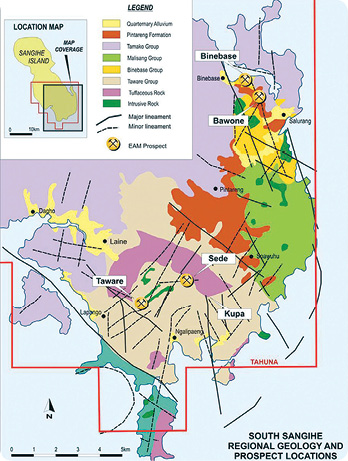 The test work, conducted by ALS Laboratories in Perth, Australia, under the supervision of Ausenco Processing Engineers, found that more than 92% gold recovery could be achieved from oxide ore in the composite samples using leach technology. Ausenco also achieved more than 83% recovery from the sulphide ore in testing using flotation practices.

“The test results further demonstrate the potential at Sangihe to advance to development and that heap leaching can be a low-cost alternative,” says East Asia CEO Ed Rochette. “More work is planned, including gravity recovery and downstream test work, to define a process flowsheet.”

In 2013, the company carried out a 5164 metre drilling project at Sangihe Island, comprising 25 holes at Binebase for 2485 metres, six holes at Bawone for 976 metres and 10 holes at another mineralized zone, called Taware, for 1703 metres.

Sangihe is held under a Contract of Work permit, which allows access and development for 26 years. It is on the southern part of Sangihe Island and has an existing NI 43-101 compliant inferred resource of 27.3 million tonnes using a 0.25 grams/tonne gold cut-off and an average of 0.95 grams/tonne gold and 13.58 grams/tonne silver for 836,718 ounces of gold and almost 12 million ounces of silver.

The total tenement consists of two blocks covering Taluad and Sangihe islands, located between the northern tip of Sulawesi Island in Indonesia and south tip of Mindanao in the Philippines. East Asia has a 70% working interest in the tenements and is the operator with three Indonesian companies owning the remaining 30% interest combined. The company’s focus is on Block II, known as the Sangihe project and covering 42,000 hectares. It includes the Bawone and Binebase prospects on the eastern part of the island and Taware prospect in the south-central region with infrastructure in place.

East Asia has recently closed an offering which raised Can$1.1 million with proceeds to be used for general working capital.

Last year the company’s partner in the Miwah project in Aceh province of northern Sumatra requested that the project be placed into suspension while the parties seek to change the forestry classification there. “Our opinion is that our land position has been an active exploration site for more than 20 years and should not have been designated as protected forest,” says Ed Rochette.