ROCK chip sampling from initial benching at the Singgahan prospect of Arc Exploration’s Trenggalek project in East Java has highlighted a broad zone of anomalous gold-copper-molybdenum in the weathered bedrock. The company believes that the geochemistry is encouraging and may indicate the presence of a porphyry system at depth. 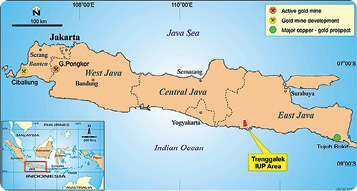 The Trenggalek Exploration IUP is in the south of East Java.

Arc managing director Dr Jeffrey Malaihollo says the broad zone of anomalous gold-copper-molybdenum geochemistry is encouraging. The possibility of a porphyry system at depth is reinforced by the discovery of outcrops containing disseminated magnetite, pyrite and chalcopyrite mineralization that are typical of porphyry copper-style systems.

He says the continuous-chip samples came from a bench designed to investigate the source of a coincident gold-copper-molybdenum soil anomaly reported from Singgahan prospect earlier in the year. Soil sampling has identified a 1000 metre by 500 metre anomaly with +20 ppb gold, +90 ppm copper and +4 ppm molybdenum contours within a prominent northwest trending structural corridor that extends across the project. “Additional benching is in progress. The results of this program will be integrated with geological and geophysical data to plan a scout drilling program.”

The Trenggalek project is an Exploration IUP tenement covering about 300sqkm in the same arc segment that hosts the major Tumpangpitu porphyry gold-copper deposit in the Southern Mountains of East Java. The project has excellent infrastructure with a network of sealed to graded roads traversing almost all of the tenement area.

Arc’s first drill hole at the project intersected extensive hydrothermal alteration and pyrite mineralization at the Jerambah prospect, which is about 2km southwest of the Buluroto epithermal gold-breccia prospect on the southern side of the Trenggalek tenement. This was interpreted to be on the margin of a possible porphyry system.

Exploration activities at Trenggalek are managed by Arc but fully funded by Anglo American under a farm-in agreement reached in December 2012. Anglo has the right to earn 51% interest in the project by sole funding US$10 million before October 1, 2016. It can then move from 51% to 75% by sole funding an additional US$10 million. On reaching 75%, Anglo will free carry Arc for its remaining 20% through completion of a pre-feasibility study.