GUILDFORD Coal’s Baruun Noyon Uul (BNU) mine, formerly North Pit, has been successfully and formally commissioned for operations and sales by the Mongolian Government. This is a significant development milestone that enables the BNU mine to extract coal in readiness for first sale. 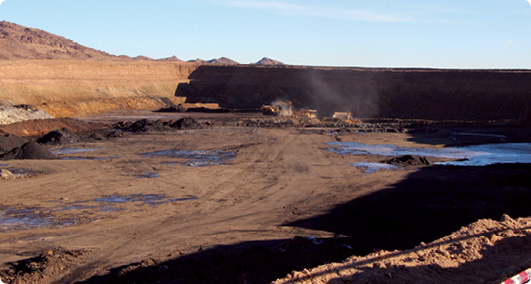 The east wall of the boxcut at Guildford Coal’s Baruun Noyon Uul coal mine in the South Gobi region.

ASX-listed Guildford, which has an equity share in a number of tenements contained in two projects in Mongolia through its shareholding in Terra Energy LLC, now awaits final permitting of the coal transport company that will deliver first sales from the mine to the coal distribution hub at Ceke on the China border.

This project is about 1000km southwest of the capital Ulaanbaatar and about 130km by road from Ceke, where coal from Mongolia is currently transported to China. The project is also strategically located about 50km east of Nariin Sukhait, which includes SouthGobi Resources’ Ovoot Tolgoi mine and the MAK mine, which produces and exports coking and thermal coal to Chinese customers.

Guildford has also completed the 98km haul road connecting the BNU mine to the coal distribution hub at Ceke via the Nariin Sukhait transport hub. Good working conditions allowed the road to be completed by a team of 350 people under budget.

At the mine the boxcut has been progressively excavated to expose coal in preparation for production ramp-up during the current quarter. Infrastructure required for the initial phase of mining was established during the second half of 2013 including ROM, weighbridge infrastructure, foundations and building structures for the heavy equipment workshop. The onsite coal testing laboratory was also commissioned.

In early January Guildford announced the completion of the OCP Asia Financing Facility, and confirmed receipt of US$10 million in funding in exchange for the issuance of convertible notes, the receipt of US$55 million in exchange for the issuance of amortizing notes, and the issuance of detachable warrants for an amount equal to 18.5% of the amortizing. Completion of the facility means that the OCP Asia Bond Warrants, for 87.5 million shares at a minimum strike price of $0.45 per share expiring October 2014, have been cancelled.

The company also recently concluded negotiations with Noble Resources International regarding funding of US$22 million. As a result long form documents have been executed and all monies under the agreement have been drawn down. As part of the negotiations Guildford has also reached agreement with Noble to work together on potential options for continuing development and expansion of the South Gobi region into a major coking coal producing region in Mongolia exporting into China.