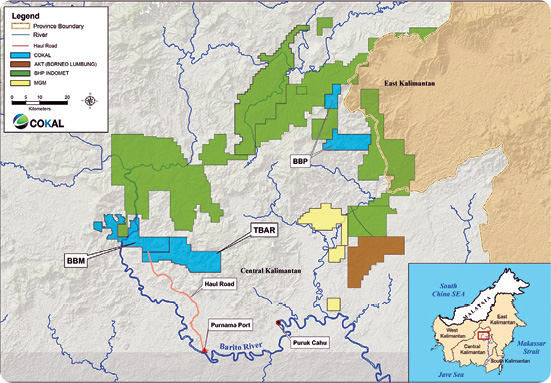 The formal risk analysis identified no issues which could not be managed by reasonable controls that would prevent the effective construction and operations of the mine, supporting facilities and transport chain.

The key concern in this area is traditionally the river access for barging, whereupon BBM utilized an expert barging consultant and barging contractor to design and manage a solution widely used in other regions facing similar environmental conditions. This coupled with planned export volumes that do not require high annual utilization of river access to reach target coal levels, together with development of a deep water river port near Kelanis to serve as an intermediate stockpile port and buffer for offshore vessel loading during the Phase 2 expansion, will help reduce any effects of seasonal variances such as river heights.

Further the study has reviewed and determined the technical solutions and costs are generally consistent with and found throughout other developed and operating coal mines in Indonesia and no particular concerns ranked highly, including regulatory or political areas that may affect the development.

The DFS also confirmed the availability and experience of a pool of key contractors, fabricators and service providers with demonstrable capability to undertake the works at BBM and who are fully cognisant of the seasonal conditions, productivity effects and logistics requirements of working in Central Kalimantan.

The marketing study identified that BBM’s hard coking coal properties would command a high value as a blending feed with significant potential upside based on the final coal handling preparation plant (CHPP) or washplant’s configuration which will be further refined as additional seam material becomes available to tailor the products to the preferred market.

The only significant outstanding item that affects BBM proceeding to construction was the final Forestry Department approval. This document is submitted and awaiting ministerial sign-off.

The total estimated development capital required to deliver the production rate, including developing a CHPP, haulage road and all necessary transport and site infrastructure is US$75 million, assuming that mining, barging and hauling equipment will be provided by the respective contractors.