The latest developments in China, Indonesia, Solomon Islands and more.

On 22 Feb 2022, the Djakarta Mining Club, with the Coal Club of Indonesia, held a webinar on “Introduction to new DMO Regulation No. 13K/2022.” There were slide presentations from Dr. Lana Saria, director of coal business of the Indonesian Ministry of Energy and Mineral Resources (ESDM), and by Dr. M. Idris F. Sihite, head of legal bureau, ESDM.

They each covered the history of DMO regulation, and outline of the ministerial decree 13K/2022. They also participated in discussions with M.S. Marpaung and Ben Lawson of the Djakarta Mining Club, Hendra Sinadia of the Indonesian Coal Mining Association (ICMA) and Norman Bissett, foreign legal consultant.

The overriding point is that the industry, and its associations, support the Mines Department in its overall DMO policy, and that there will be ongoing meetings with the government to monitor and improve the implementation of this policy.

The coal supplier and coal off-taker (PLN) each need to improve coordination and performance “to keep the lights on.” This Regulation 13K/2022 is directed at the coal supplier aspect; where the annual RKAB (coal miners work program) will be part of the DMO supply control mechanism.

The regulation 13K includes a new formula for sanctions and compensation for not meeting DMO sales contracts with PLN, or for exporting coal that does not suite PLN or other domestic markets.

China started building 33 gigawatts of new coal-fired power generation capacity last year, the most since 2016, research showed, in a sign that the country is falling back on fossil fuels as economic worries mount.

The newly added capacity under construction was three times more than the rest of the world combined, the Helsinki-based Centre for Research on Energy and Clean Air (CREA) and the U.S. think tank Global Energy Monitor (GEM) said.

While new permits were suspended in 2021, they resumed in 2022, with five projects with a total capacity of 7.3 GW approved for construction in the first six weeks of the year, the research showed.

China also approved 74 million tonnes of replacement coal-based steel production capacity last year, more than the whole of the rest of the world.

“There is no space for this new capacity to be utilised under the goals of the Paris Agreement,” CREA and GEM said, adding it could leave China with an additional $90 billion to $130 billion in stranded assets.

There have been signs of China easing up on environmental pledges as it tries to shore up an economy hit by supply-chain disruption and “zero-Covid” restrictions.

“Along with the real estate slowdown, the pandemic and pandemic control measures and expected headwinds to exports are adding urgency to boosting the industrial and construction sectors, which are the most carbon-intensive part of the economy,” CREA’s lead analyst Lauri Myllyvirta said.

Chinese President Xi Jinping recently said that China’s low-carbon goals should not come at the expense of energy and food security or the “normal life” of ordinary people.

Sun Shouliang, director of the general department at China’s Ministry of Ecology and Environment, told a briefing in late February that the country had to “prioritise stability” and should “not set goals too high.”

China will start cutting coal consumption from 2026 and is likely to put an additional 150 GW of coal-fired power into operation before then, researchers with State Grid have said.

The application did not reveal how much money Lygend plans to raise from the IPO. Its January-September profit last year stood at 415 million yuan ($65.5 million).

The filing came after the Ningbo-based company submitted a request to China’s securities regulator in late January.

Lygend Resources, which said it is China’s biggest nickel ore trader with around 27% market share in 2020, trades laterite nickel ore sourced from miners in the Philippines and Turkey, as well as nickel pig iron (NPI) from Indonesia.

It also produces nickel products at home and abroad, with domestic annual NPI production at 180,000 tonnes and two projects with Indonesian partners.

The company had invested heavily to expand business and explore more materials in the nickel sector as the resource is gaining traction amid a global new energy boom.

It has a $1.05-billion project with Harita Group – the first high-pressure acid leach (HPAL) project in Indonesia to reach production.

Lygend traded around 9.2 million tonnes of nickel products in the first three quarters of 2021 and made 11,734 tonnes of NPI during that period, according to the filing.

Indonesia and the Republic of Korea are further strengthening cooperation in the industrial sector, including investment in industrial estate development, development of electric vehicles, chemical industry, steel industry, technology transfer and the shipping industry.

These are the results of the 8th Meeting of the Working Group on Industry Cooperation (WGIC) reported at the 1st Ministerial Meeting of the Joint Committee on Economic Cooperation of the Republic of Indonesia-Korea (JCEC RI-ROK) in Jakarta.

“The two countries agreed to increase cooperation, including research in the development of the industrial sector,” said Director General of Resilience, Territorial and International Industrial Access Eko S.A. Cahyanto.

The cooperation that will be encouraged includes the development of electric vehicles (EV). Furthermore, in the metal industry, continuous cooperation has been carried out since the Korean investment by POSCO with PT. Krakatau Steel in the joint venture of PT. Krakatau POSCO in 2013.

In the chemical industry sector, Lotte Chemical Indonesia has invested in the development of a new petrochemical complex. In addition, the two countries are also cooperating in terms of technology transfer through projects Agriculture Machinery Technical Centre (AMTC).

While in the shipping industry, the two countries agreed to take advantage of the momentum of the Indonesia-Korea Offshore Congress as an effort to explore shipping cooperation by shipping industry players in both countries in the production and development of high-tech ship designs such as the LNG Carrier.

Pacific Nickel Mines Limited updated an early works program to advance the Kolosori Nickel Project on Isabel Island, Solomon Islands. The company announced the commencement of the Early Works in December 2021 and reported on 3 March that it was successfully completed on time in the wet season under trying conditions.

The work was successfully led on site by the company’s General Manager Operations Mike James in cooperation with Solomon Island consultants and contractors who are also likely to be involved in the construction and operation of the project. 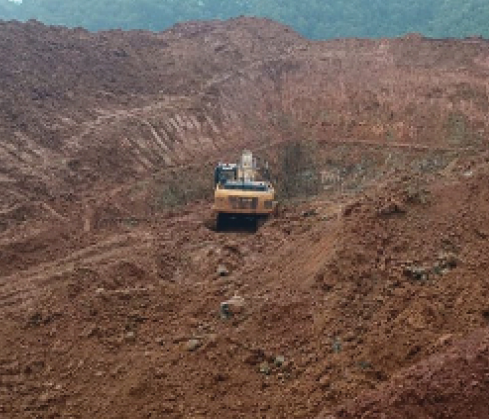 The Early Works program was designed to allow the company and its contractors to establish a site base at Kolosori in preparation for the main construction phase, which is expected to commence this year subject to appropriate government approvals and funding.

The main components of the Early Works program included:

Samples from the test pit work are in the process of being dispatched for assaying and saprolite stockpiles are being monitored for water moisture. Samples have also been taken to carry out work on the Transport Moisture Level (TML) which is an important consideration for the shipment of laterite ores.

The geotechnical report has been completed and is now being assessed by Pacific Nickel Mines and its consultants in preparation for the definitive feasibility study and the construction design of the wharf area, which is a critical element for the development of the Kolosori Nickel Project.

Pacific Nickel Mines said it remains on track to progress through the required regulatory approvals and expects to receive a mining lease for the project in the first quarter. The process was impacted by the outbreak of COVID-19 in the Solomon Islands in January.