The pandemic had a significant impact on industrial activity, global steel markets, and downstream producers in 2020. Although the world is still emerging from the pandemic, and far from resuming full-blown industrial production, the company sees a vastly improving outlook for most metals going into 2021.

However, the road to the recovery and the potential for prolonged economic weakness remain a key source of uncertainty. This could undermine growth, weaken market sentiment, and increase volatility in commodity prices.

Gold and iron ore remain notable exceptions after they recently reached historical peaks. Gold continues to shine amid uncertainty about the economic outlook and a weaker U.S. dollar. After being the first country to enter an extended lockdown, China’s ramp-up of industrial activity following the height of the pandemic has caused Chinese steel demand to resurge in a supply-disrupted market, driving iron ore prices to six-year highs.

Indian companies were not in a good position going into the pandemic, as domestic demand was already slowing down. Leverage was high as companies continued spending on organic growth projects or acquisitions of distressed steel assets while cash flows were subdued. 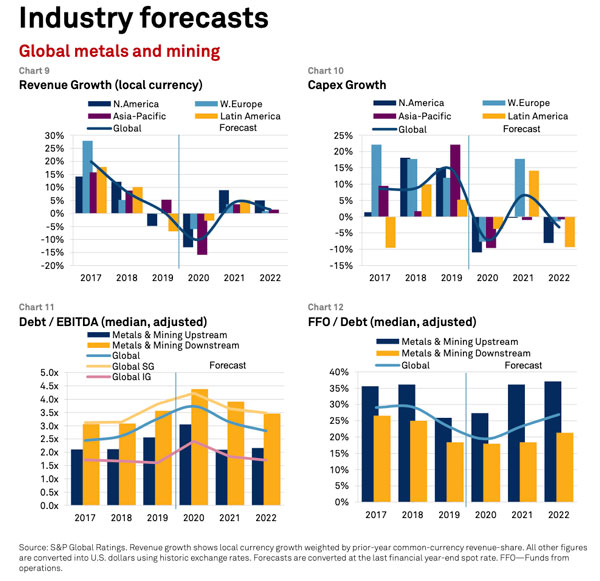 S&P offered these main assumptions for 2021 and beyond.

Higher prices signal a possible emergence from the trough – Lower demand and prices for mined base metals like copper and iron ore usually prompt quick reductions in production. This is because contractors of the smaller marginal assets that produce such metals can adjust costs and outputs more nimbly. Higher-cost production on generally steep cost curves shut down quickly and enabled a quick price response. For example, copper prices, which are sensitive to small changes in fundamentals, have bounced back to a five-year high after falling twice in 2020, once as the pandemic hit China, and then again as the virus spread globally. The price of copper spent about eight weeks below $2.50 per pound, which S&P believes was a catalyst to stop about 10% of output that was likely making cash losses at those prices.

Restarts in steel and aluminum will take longer than mined metals because of persistent global overcapacity. The American Iron and Steel Institute reports that steel production in the U.S. was down 18% year on year through Nov. 28, 2020. It can take months to ramp production down and then back up, so a rebound in demand has brought operating rates back above 75% in late 2020 from 67% so far this year, which could mark a turning point for earnings and cash flow. Profitability in steel and aluminum has been in a longer downturn, with demand dropping throughout 2019. By the time the pandemic hammered global GDP in early 2020, many assets were near cash breakeven, which prompted aggressive cutbacks. Metal demand has been more robust than S&P expected through the first three-quarters of 2020, especially in China. That said, emerging pandemic risks for winter in the northern hemisphere could disrupt a sustained improvement in volumes and prices through 2021. Tighter capex programs in recent years could lead to some capacity constraints over the medium and long term. Finally, the longstanding inverse relationship between the U.S. dollar and metal prices could be a tailwind if the dollar retraces its gains during the pandemic.

Gold prices are dropping as better news on COVID-19 vaccines clears some uncertainties. The correlation of gold prices with the U.S. dollar, interest rates, inflation, and oil goes some way to indicating the price direction. For example, the decline in gold prices has tracked the decline in the U.S. dollar in the past few months, while rising oil prices as a barometer of economic recovery bring their relationship with gold prices back toward a historical norm. We use a declining price assumption for gold in our credit analysis over the next few years, because we expect these historical relationships to normalize after the pandemic.

Metal producers are at risk of more intense competition – Overcapacity remains a structural problem for the steel industry. This is most likely to have a negative impact on higher-cost producers, especially in North America and Western Europe. The downturn hit most steel producers outside China hard in the second quarter of 2020. Without the subsequent market rebound, the financial and rating implications could have been worse.

Prompt capacity closures removed supply from the market, but when this production returns will be important for the resilience of prices and margins in 2021. See S&P’s report, “The Shape of Recovery for Global Steel Depends on ABC: Assets, Balance Sheets, and China,” published on Dec. 1, 2020, for more detail on market dynamics and ratings. If volumes remain below 2019 levels beyond 2021, some capacity closures in North America and Western Europe could become permanent, because more profitable and better-funded competitors will build new capacity in that timeframe, and this could replace aging assets.

Better returns on investments and controlled credit risks might prompt more acquisitions – After curtailing capex on the back of the pandemic and the prospect of lower demand in the coming years, capex appears to be picking up, but companies remain disciplined in their use of debt. S&P doesn’t exclude more growth-oriented capex, depending on outlook for commodities. Coming into the 2019-2020 downturn, the industry’s debt leverage was lower than in previous cycles, mostly because of spending restraint since 2015 and a renewed focus on returns over-growth.

Such restraint, particularly in mining, has already resulted in a tight market that could be exacerbated if there is a broad upswing in demand. This could occur in 2021 if metal demand strengthens more than we anticipate. In addition, limited equity-funded M&A has bolstered some business mixes, in the steel industry, for example, and highlights companies’ reluctance to use debt to fund takeover premiums that have often destroyed value. Some selective M&A activity may continue. Lastly, S&P views the current very low interest rates and the availability of liquidity as allowing some weak companies to continue their operations, rather than becoming potential distressed targets.

Credit metrics and financial policy – The prudent financial policies that many companies adopted in response to the last major downturn in 2014-2016 have stood them in good stead in 2020. These policies – including limits on debt and leverage, as well as shareholder distributions – are likely to remain a credit strength in 2021.

The strong iron ore prices and elevated gold prices during the current global downturn mean that this year’s severe global economic recession hasn’t been a harsh test for most producers of those commodities, or their financial policies. The majority of large and midsize companies entered the recession with very healthy balance sheets, limited capex commitments, and flexible dividend policies. Even though these companies didn’t need to change their short-term objectives, some took the opportunity to reduce their spending and waive dividend payments.

This resilient performance was not the case for many smaller, less diversified companies, those without exposure to iron ore or gold, and particularly downstream companies. Here, cash flows and credit ratios deteriorated due to the pandemic’s impact on prices and volumes.

Nonetheless, the weak results in 2020 did not translate into a wave of downgrades or even negative outlooks. The rebound in demand and prices in the second half of 2020, which we expect to continue in 2021, means our multi-year credit-metric forecasts should return to rating-commensurate levels.

This assumption is also supported by the headroom companies had in early 2020, and their ability to generate positive free cash flow during the trough of the cycle. Many of the companies remain committed to deleveraging, and the 2020 downturn has provided them with another incentive to accelerate the process.

As a result, the appetite for acquisitions or greenfield investments – which was already low before the pandemic – may dwindle even further for many companies in the next two to three years.