Mayur Resources confirmed it will sharpen its focus on its industrial minerals and energy projects in Papua New Guinea (PNG) after reaching an agreement to list its PNG copper and gold assets on the TSX Ventures Exchange via a Reverse Takeover (RTO). 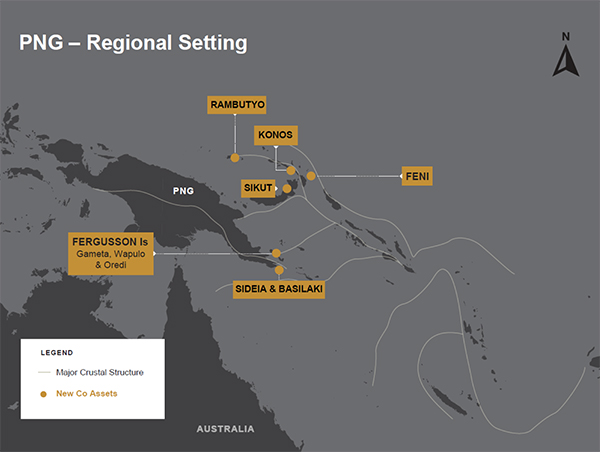 Planned for completion before the end of the year, the transaction with XIB|Capital Corp will seek to raise at least C$5 million to unlock greater shareholder value from the assets which will create an investor relevant “New Co” on the TSXV with a compelling valuation and substantial news flow upon listing.

To enhance the value of the spin out, Mayur will acquire all the shares in Ballygowan Ltd and Pacific Arc Aurum (Niugini) Ltd, two privately-owned companies that hold highly prospective gold assets in PNG including the Gameta and Wapolu projects on the Fergusson Islands.

The above agreements are interdependent and together form the RTO transaction, which will see Mayur (being current Mayur shareholders) owning around 50% of the renamed TSX Ventures Exchange company.

Mayur Managing Director Paul Mulder said the previously foreshadowed spin out followed the board’s commitment to unlocking value for shareholders and was consistent with the company’s strategy of preserving diversification whilst delivering material value.

“I understand and support that different investors in Mayur prefer a diverse asset exposure but retaining a primary exposure to industrial minerals and energy that contributes to Nation Building in PNG is the priority,” Mulder said.

“Mayur shareholders will have indirect exposure to a new entity with a highly experienced and dedicated team (with copper gold centric Mayur staff moving to New Co), that will make the most of our significant gold inventory and geological endowment in a capital rich jurisdiction (Canada) renowned for supporting gold explorers and emerging producers.”

Mulder said he was looking forward to taking advantage of “greater focus and time” to realise more timely and superior returns for the company’s Orokolo Bay Industrial Sands Project, Lae Enviro Energy Park and its flagship Central Cement and Lime Project, which was recently awarded an unprecedented 20-year mining lease from the PNG government.

“Mayur will be better placed to achieve considerable gains while New Co, which will be renamed as part of the transaction, will leverage Mayur’s existing in-country expertise and ‘can do’ culture to return greater value for shareholders but also excitingly that Mayur’s Non-Executive Director Frank Terranova has agreed to take on the role as managing director of New Co, who previously held the role of managing director for Allied Gold before it was acquired by St Barbara,” Mulder said.

He said Mayur would initially remain the largest shareholder of New Co with its current intention to complete an in-specie distribution of its shares to Mayur’s current shareholders in line with TSXV and other regulatory requirements.

Further Mulder added, “I look forward to continuing to work with all the very important stakeholders across our portfolio of assets. We pride ourselves on land owner and government engagement and as the projects progress, the tangible benefits of developing our assets will be experienced and realised for all stakeholders.”

“Upon completion of the transaction and capital raise, the first two years of activity will focus on progressing the Fergusson Islands assets towards cash flow and testing drill targets on Feni Island to replicate and enhance previous attractive copper and gold intercepts,” Mulder said, “Both workstreams are expected to generate a substantial increase in the gold inventory whilst advancing the portfolio in its entirety towards revenue generation.”