Thor Mining’s Bonya project White Violet deposit has produced positive preliminary results from the second round of drilling at the adjacent 100 per cent owned Molyhil project, in the Northern Territory of Australia. 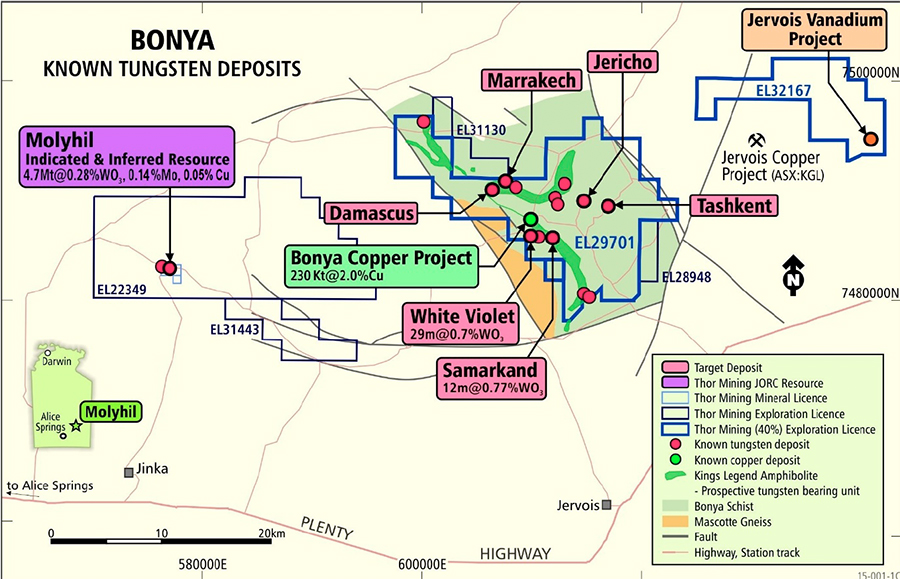 The Bonya project is held in joint venture between Arafura Resources Limited (60 per cent) and Thor (40 per cent), with Thor acting as manager, and each party contributing to the cost according to their equity.

A total of 11 holes were drilled at White Violet to complete the program for the deposit, with the drill rig now moved to the Samarkand deposit for the second part of the program.

The company stressed that results obtained via portable X-Ray Fluorescence (XRF) determination should be considered preliminary and subject to confirmation by subsequent geochemical analysis.

According to Thor, tungsten-bearing mineralisation extended by 40 metres to both the east and west with a total strike length of 120 metres and vertical depth of 110 metres.

Mr Mick Billing, Executive Chairman, said that it was very exciting to have confirmation of both consistency of mineralisation and extensions to strike at the White Violet deposit.

“Tungsten grades continue to be positive, and it is also pleasing to see further evidence of copper mineralisation,” stated Mr Billing.

“The key Thor driver for drilling at Bonya is to add to the Molyhil area mining inventory with an objective of a minimum of ten years total open pit mining and processing. These results, subject to assay and follow up resource work, should, we expect, go quite some way towards meeting that objective.”