Monash University, Clayton was selected a winner from amongst universities across Asia Pacific vying for the top spot in the annual Warman Design and Build competition. 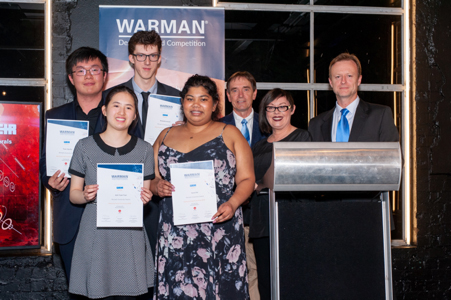 Second year mechanical engineering students put theory into practice in the annual competition that has run since 1988. Established by Engineers Australia, with Weir Minerals as the sole sponsor, this competition is integrated into Australian universities’ engineering curriculum, and plays a valuable role in developing the talent of our future engineers.

Offering students a hands-on approach to engineering, the academic competition prepares students for their careers as they design and build an autonomous machine able to successfully perform a specific task.

Ed Szymanski, Director of Engineering and Product Development for Weir Minerals says that a key challenge for students this year was to develop a prototype which was not only successful as a collection and placement system, but was also able to match or beat the speed of competitor designs.

Throughout the year, internal heats were run at 19 campuses across Asia Pacific to determine which team would represent their respective university at the national finals, held at the Powerhouse Museum in Sydney on 19 and 20 October 2018.

The finalists also had the unique opportunity to go behind the scenes of the Weir Minerals Foundry in Artarmon, Sydney. Walking them through everything from the engineering design and materials selection to the manufacturing stages, the tour enabled students to see the end-to-end process behind the iconic Warman® centrifugal slurry pump.

Monash University’s winning entry was unique as the only prototype without wheels, using only its arms to successfully lift and relocate the powerpack from a dry well to a new water storage facility in record speed.

“Our goal was always to create a simple and efficient device which completed the task in the least amount of time,” says Ben Jessett, Monash University, Clayton team captain. “We made the decision to remove our driving wheels and create an almost entirely mechanical machine. As a result, this improved overall reliability and decreased run time to under five seconds. We believe this decision is what resulted in our first-place finish.”

Demonstrating combined performance, elegance and simplicity with a judicious use of materials and manufacturability, the University of Canterbury was selected for the Weir Judges Award, while Monash University, Clayton was awarded Best Design by the NCED judges for the creativity and simplicity of their design, with potential to succeed as a viable commercial solution.

“We analysed the prototypes from an industrial engineering perspective. The models which thrived underpinned innovative design and simplicity of operation with reliability, which is crucial to real industry application,” states Jon Waite, Head of Engineering Projects for Weir Minerals Asia Pacific. “By equipping students with these skills and judging their designs from an industry, rather than academic perspective, it is evident that the future of the engineering industry looks promising.”