Potain cranes on the job in Laos


One of the largest groups of Potain cranes at work in Asia is helping the Xayaburi dam in Laos stay on schedule as the eight-year project enters its second phase. The 23 Potain tower cranes began arriving at the job site in 2012 and are expected to stay on site for another three or four years, as the project builds towards its 2020 activation date. 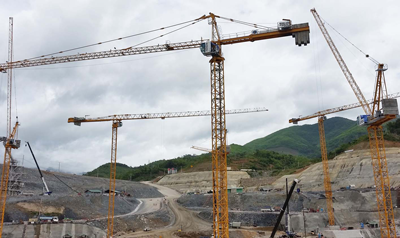 The success of the ambitious project is strongly dependent on reliable performance from the fleet of Potain tower cranes, and to date that performance has been as expected. There are two huge Potain MD 1600 cranes installed on the job that are playing the lead role in the enormous concrete pouring operation. The cranes have been configured with 80 metres of jib and have a maximum rated capacity of 64 tonnes.

Roller Compacted Concrete is poured by the cranes at rates of up to 250 cubic metres per hour and the MD 1600 cranes are working with Potain’s top-belt concrete placing system. The top-belt system acts as a concrete conveyor belt that extends 25 metres beyond the jib, enabling each crane to pour up to 600 tonnes of concrete per hour at a radius of up to 105 metres.

Main contractor on the project is Thai company CH Karnchang PCL, and the Potain cranes were supplied to the company by SB Siam, the exclusive dealer for the cranes in Thailand.

SB Siam sales manager Verawat Siriboonrit said his company remained closely involved with the project. “The cranes have been performing well and have actually helped the project stay ahead of schedule.”

“We’ve been training a lot of people associated with the job and also keeping a steady supply of parts heading up to the location. The job site is working 24/7, so it’s imperative that the cranes stick to their tasks and also fit in with the overall construction schedule. So far they’ve performed well.”

Alongside the two MD 1600 cranes are a mix of 21 other Potain cranes, all built at the Manitowoc factory in Zhangjiagang, China. The two larger MD 1600 cranes were built at the Manitowoc factories in Moulins and Charlieu, France. The cranes are strategically positioned to give every square metre of the job site at least 3 tonnes of lifting capacity.

CH Karnchang PCL project manager Thamnoon Surarat said Potain’s experience in dam building added a level of reassurance to this huge undertaking. “Potain provided the best solution for us, and the company’s Lift Solutions department has a wealth of experience in successful dam construction that has given us confidence that our own project will be a success.”

“The Lift Solutions department and SB Siam worked closely with us to design, implement and maintain a unique set-up that is working consistently in harsh and humid conditions to tight deadlines and a demanding work schedule. Everything is on track and we are delighted with the cranes.”

With phase I of the project now complete, phase II has started that will include construction of the dam’s powerhouse. The 820 metre-long Xayaburi dam will be 150 metres wide and 35 metres high on completion. It is 100km downstream of Luang Prabang in Laos and owned by the Xayaburi Power Company. It will produce 7400 GWh annually and the power will be supplied to Laos and Thailand.