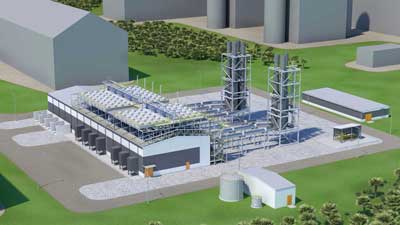 The letter of award was issued in December 2015 and the power plant, delivered on a turn-key basis, is expected to be operational by March 2018.

APGCL plans to replace outdated gas turbine units with Wärtsilä technology. When gas is scarce, the plant needs to be run at part-load. Wärtsilä engines can do this while maintaining very high efficiency.

According to APGCL, this would not be possible with gas turbines. By absorbing the variations in the gas supply, Wärtsilä engines enable APGCL to produce more efficient power from the same amount of fuel without affecting the heat rate.

Initially, the power station will operate on an open cycle mode, but APGCL has the option of converting it to a combined cycle plant by installing waste heat recovery units. The modularity of Wärtsilä power plants also allows the customer to easily expand the power plant with more engines to meet future demand.

Currently, a major portion of the electricity is imported into Assam from outside of the state. The new plant will increase the region’s energy independency and help to meet its increasing electricity demand.

According to a social responsibility report by APGCL, the project will also provide the local population with better access to electricity. A reliable power supply will also benefit the area’s hospitals, schools and other social services.

The project is financed by the Asian Development Bank as part of an investment program for the energy infrastructure in Assam.

Wärtsilä has an installed capacity of 4000 MW in India, and globally 60 GW in 176 countries.