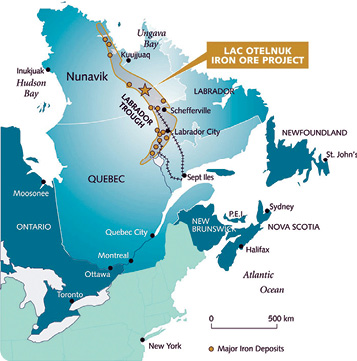 The Lac Otelnuk Iron Ore Project is in the Labrador Trough which extends through the Canadian provinces of Quebec and Labrador.

A significant diamond drilling effort was carried out in 2012 with the main goals to complete infill drilling in the north part of the defined mineral resource area on a 600 by 500 metre grid to upgrade the resource categorization and to accurately define the limits of the Main Zone by extending the up-dip mineralization to surface along the western margin of the mineralization.

The results show that the measured and indicated resources have increased to 20.64 billion tonnes, representing an increase of about 82% compared with the estimate of August 2012, based on a Davis Tube Weight Recovery cut-off grade of 18%. Inferred resources total 6.84 billion tonnes.

The JV has also completed the geotechnical drilling and test pitting programs for the tailings management facility, process plant, airstrip and construction material borrow sources. In addition, the hydrogeological and rock mechanical holes for the open pit design have been completed. An 80 tonne bulk sample was extracted and pilot plant testing is in progress.

Adriana’s president and CEO Allen Palmiere says, “We are very proud of the work our team has completed to date and with the progress we have made this year with SNC-Lavalin’s expertise on our project.”

Adriana transferred its interest in the project into LOM and WISCO has acquired 60% interest in LOM. WISCO has agreed to use commercial best efforts to assist LOM obtain project financing for 70% of the development and construction costs, the size and scope of which will be determined by a bankable feasibility study.

WISCO is one of the major subsidiaries of Wuhan Iron & Steel (Group) Corporation, headquartered in Wuhan in the Chinese province of Hubei. The WISCO Group is one of the ‘Big Three’ Chinese state-owned integrated iron and steel companies.