A RECENT survey confirms that employment of resources professionals is stabilising after an extended period of high unemployment during the downturn. The AusIMM Professional Employment Survey shows unemployment rates of Australia-based professionals working in the mining and resources sector have fallen from 14.1% in 2016 to 7.4% in 2017.

This improvement in employment is coupled with a significant improvement in industry outlook, with 65% of survey respondents anticipating increased industry opportunity in the coming 12 months, compared to 29% in 2016.

The survey is conducted annually and 2017 data was collected from 1955 AusIMM members in June and July. AusIMM is the peak body for professionals and managers in the resources sector and represents 13,000 members working in Australia and internationally.

AusIMM CEO Stephen Durkin says the results align with a growing positive sentiment towards professional opportunities in the resources sector. “Australia’s mining industry is world-class, and our success is a credit to the talented professionals working in the sector. There are 65,000 professionals employed in the Australian mining industry, a sector that contributes A$236 billion, or 15% of GDP, to the economy. 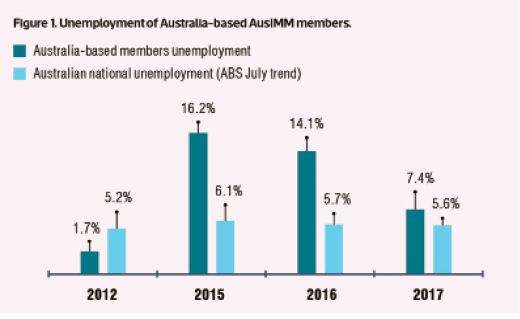 “It is encouraging to see such a strong uplift in employment and opportunities for our members and resources professionals as a whole after what has been a very difficult few years for the industry. There are many positive signs that the sector, which is so important to the prosperity of our nation, is returning to good health,” he says.

Despite the overall improvement, there are sectors of the industry that are lagging. In Western Australia, unemployment remains higher than the rest of the country at 9.0%. Unemployment amongst professionals working primarily in iron ore also remained high at 14.4%, compared to other commodities such as copper or coal that recorded low rates at 3.5% and 3.9% respectively.

“While the overall rate of employment has improved significantly, there is a fragmentation with some sectors and regions continuing to report high rates,” Stephen Durkin says.

Survey results also indicated some key differences in employment and remuneration based on gender, with a remarkably low unemployment rate for female resources professionals of 3.7% compared to 8.1% for male professionals.

While employment of female professionals, who make up approximately 15% of the workforce, has improved, there remains a significant remuneration gap. Female AusIMM members reported lower wages than male counterparts in all career stages except graduate level.

“This gap in remuneration is an issue of concern for the AusIMM, as diversity within the sector is vital to our ongoing success and growth. Together with our Women in Mining Network (WIMnet), we will continue to champion diversity and inclusion throughout the industry to support increased participation and gender equity, reflecting the broader community in which we work,” Stephen Durkin adds.