Industry has been treated ‘rather shabbily’

MINING is still Australia’s truly great competitive international industry and will remain so despite the efforts of detractors, according to former federal treasurer and Australian Future Fund chairman Peter Costello. “In this industry we lead the world,” he said, “and the nation’s prosperity will be closely linked to mining for decades.”

Although contributing just 8.9% to Australia’s GDP, Peter Costello told the second Australian Mining Industry Annual Lecture that it was the major contributor to exports with 42.2% while oil and gas contributed another 7.3%. “The industry’s share of exports has jumped in the aftermath of the boom and is carrying Australia exports more than ever.”

The lecture in Melbourne attracted more than 220 mining industry players. It was organised by the Minerals Council of Australia and supported by BHP Billiton with the aim of promoting the role and contribution of the minerals industry in Australia.

Peter Costello said that far from enjoying the hero status that normally would go to an industry overcoming the odds to be a world-beater, mining had been treated rather shabbily in Australia.

“Students in modern Australian schools are more likely to learn about mining as a threat to the environment than an industry that underpins living standards.

Regarding the industry’s poor public image, he said, “Miners tend to be practical people. They focus on getting things done and getting output. Their opponents are rhetorical people who focus on stopping things getting done.”

He urged the sector to continue to argue the case for mining. “Mining never tells its story well and opponents are very good at telling their story.” He said a national, united approach to dialogue was needed rather than the current piecemeal approach.

Peter Costello related the economic experience of Australia in 2000 to the current period. He said at the time all the talk surrounded technology while mining was on the nose with many saying that it was finished as an important industry. Then the dot.com bubble burst while ‘old’ sectors like mining and agriculture continued to contribute to economic growth and particularly to exports.

Today we again have many saying mining is finished and pinning their hopes on the next wave of the technological revolution. He said the current preoccupation with creating the next Facebook or Uber ignored the enduring economic prowess and innovation witnessed in traditional industries like mining.

“Technology companies are not replacing the so-called old economy but allowing higher value to be captured from it. The tens of billions of export dollars it [mining] earns the country is not going to be surpassed by tech start-ups any time soon and certainly not in our lifetimes,” he said.

“The senior members in the Government understand this. The talk might be tech but the money’s in the mining.” He added that although innovation was not usually associated with mining, the resources sector was a key user of cutting-edge technology.

In regards to the Australian economy, Australia’s longest serving treasurer said government spending needed to fall below 25% of GDP if the budget was to be balanced. “It is a myth to suggest the previous period of deficits had been closed by the mining boom.” He noted that he had balanced the budget when iron ore was fetching less than $US13 a tonne. The price is now about $US58 a tonne after peaking above $US180 in 2011.

“We were in surplus at the low point of the mining cycle – it was at the height of the boom that we were running deficits,” he said. “The tragedy of Australia’s fiscal policy was that the (GFC) fiscal stimulus was overdone and then never withdrawn.

“Our budget position significantly declined from 2008 and the great tragedy is that it continued to decline during our most favourable trading conditions in a century. Successive generations will not forgive that.” 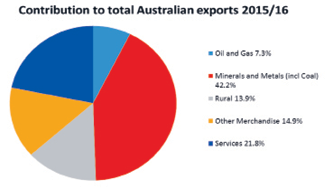 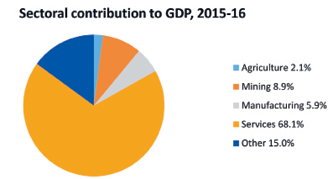