Now is nickel’s time to shine


WITH Indonesia’s ban on the export of raw ores having a major influence on the global nickel market, now is the time for nickel to shine ... and the Philippines is in the perfect position to capitalize. It appears most nickel producers in the country are benefiting from the boom although recent government comments about implementing a similar ban to Indonesia could hinder any long-term gains. 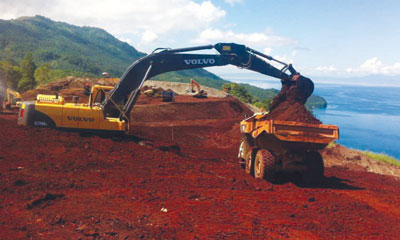 The Agata Mining Ventures Inc joint venture between TVI Pacific and Mindoro Resources is a new nickel project that is benefiting from Indonesia’s ore export bans.

The proximity of the Philippines to the major nickel markets in north Asia, generous nickel resources and reserves, and strong nickel prices put the nation and its nickel producers in the enviable position of being able to benefit more than other nickel producing countries which are much further away.

In fact, the Mines and Geosciences Bureau (MGB) recently stated that nickel production in the island nation grew by 37% in the first nine months of 2014, and shows no sign of slowing in the short to medium term.

The Indonesian ban, designed to promote local processing, started in January 2014 and initially drove prices to a two-year high in May last year, before larger-than expected Philippine exports and slowing Chinese growth reversed the rally. Citigroup says that it is still bullish on nickel because a global shortage will emerge.

A rise in exports of lower grade Philippine ore to China and the blending of this with older Indonesian ore inventories, delayed the much anticipated supply tightness. With the Indonesian ore export ban still in place and Chinese inventories edging lower, the market is again optimistic on the fundamental outlook for nickel.

While ore exports from the Philippines to China rose 24% to 31.2 million tonnes in the first 10 months of 2014, Citigroup analysts said in a December 1 report that volumes probably won’t expand much in 2015 even with more mining. Ore from the Philippines typically has less nickel content than from Indonesia, which was the world’s largest mined producer before the ban.

Nickel Asia Corp, the Philippines’s biggest producer, is among those gaining from the ban. Ore sales rose 38% in the first nine months of 2014, boosting profit more than four-fold to a record.

MGB director Leo Jasareno says that more companies are seeking permits. He said the office authorized two more nickel mines in 2014 year, including one for TVI Pacific pending for about 15 years. “If Indonesia’s ban goes on we’ll see more new mines in five years. Nickel will be the darling of mining in the next 10 years.”

Platts believes the outlook for nickel could improve further in the second half of 2015. It says much of the problem for nickel in 2014 was that prices ran far ahead of fundamentals. “In the years following the global financial crisis, the nickel market saw a significant supply surplus develop with a combination of new large laterite mining projects and increased Chinese nickel pig iron production pushing the market into oversupply. Nickel remained in an estimated global surplus of 60,000 tonnes in 2014.

“Yet, ultimately, China cannot destock its ore inventories indefinitely, and the general consensus is that stocks of Indonesian ore are much lower than in 2014 and will continue to decline, with lower grade ore from the Philippines unable to fully replace it.
“Philippine ore exports to China in 2014 were also mostly from stockpiled ore reserves, and analysts believe there are no longer large quantities left to ship to China and that mined grades are likely to be lower than those seen in 2014.”
Platts also says that the building of refined nickel capacity in Indonesia is reported to be slower than anticipated, with the majority of projects having made little progress over the last 12 months. This will increase the time period by which the Philippines can benefit from the current conditions.