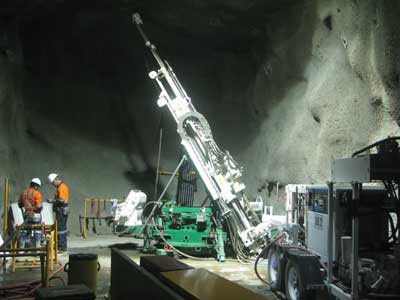 UNDERGROUND drilling by Panoramic Resources at the Savannah North Nickel Project in the East Kimberley region of Western Australia has identified additional mineralized zones while additional surface drilling has opened up an entirely new exploration front.

Another daughter hole was drilled along the same azimuth as the mother hole targeting an area 100 metres above the initial discovery zone. The latest hole intersected 1.8 metres @ 1.72% nickel on the contact of the Savannah Intrusion at a down-hole depth of 571 metres.

A third daughter hole has been drilled designed to test an off section area about 60 metres to the west and 40 metres down dip of the initial discovery.

Two surface drill rigs are on site drilling a series of broad spaced holes to build a better understanding of the broader geological and structural relationships of Savannah North. Three holes have been completed with one targeting a strong off-hole electromagnetic (EM) anomaly identified by the underground mother hole.

This surface hole intersected a broad zone of fine grained, disseminated sulphide mineralization from about 910 metres to 1025 metres down hole. A chilled margin contact zone to the North Olivine Gabbro (NOG) and surrounding geology was identified between 1025 and 1038 metres, returning an intersection of 7.0 metres @ 0.50% nickel, 0.21% copper and 0.02% cobalt.

It is now considered that the disseminated sulphides encountered in this hole are not adequate to explain the strong EM response identified in the underground mother hole, nor the strong, highly conductive down-hole electromagnetic (DHTEM) response subsequently identified in the surface hole. Further drilling and DHTEM surveys will continue testing this strong EM response.

The two other surface holes were drill to the east of section 6000mE. Both were drilled through the NOG and, like the first surface hole, intersected increasingly more olivine rich rock types and disseminated sulphide mineralization at depth.

The mineralization intersected in the NOG is significant and demonstrates for the first time that the NOG at Savannah is a mineralized intrusion very similar to the Savannah Intrusion. This opens up an entirely new avenue for exploration.

The underground drill rig will continue to target mineralization about the initial discovery hole and preliminary planning for a new explorative drill drive is progressing. Surface drilling will also continue to drill exploratory holes.
Savannah North is north of the operating Savannah mine. Panoramic also has the Lanfranchi project near Kambalda. On a group basis Panoramic produced 19,561 tonnes of contained nickel in the 2013 financial year and expected to produce up to 22,000 tonnes in the 2014 financial year.