MASAN Resources, a subsidiary of Masan Group, is vying to become Vietnam’s private sector resources champion by acquiring, exploring and developing resource assets. In 2010, the company acquired the Nui Phao Project in Thai Nguyen province in northern Vietnam containing tungsten, fluorspar, bismuth and copper. JORC compliant reserves were at 52.5 million tonnes of ore with average WO3 (tungsten trioxide) grade of 0.21%. Now some 15 months after starting commissioning Nui Phao is the largest producer of tungsten concentrate outside of China and is ramping up to become one of the largest producers of acid-grade fluorspar and bismuth in the world.

What notable milestones has Masan achieved at Nui Phao?
It’s a simple question but not a simple answer. With every project development, there are key milestones across a range of areas; permitting, access, community, funding, construction, commissioning and production. For Nui Phao some of the key milestones in getting the project restarted included getting funding completed, community resettlement activities resolved to a point where we could commence construction, and then the operations milestones. Overall we have a progressive resettlement approach so that we try and minimize disturbance impacts on communities until required, while widely communicating timelines with impacted communities. 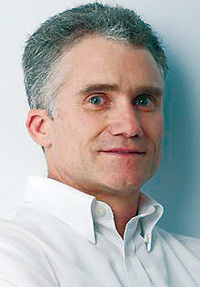 We also focused on rebuilding the relationships with the three layers of government and the community because we were restarting a project that originally kicked off in the early 2000s. Construction was commenced in mid-2011 and completed in less than two years. This was followed by commissioning last year and production ramp-up since then.

Project-wise we’ve also achieved some excellent safety and environmental milestones. The teams achieved more than 13 million man hours LTI (Lost-Time-Injury) free, with up to 3200 people working on site at different times. Initially there was a lot of skepticism by people both within Vietnam, and elsewhere in the industry as to our ability to be able to undertake construction and operations in a safe fashion, but we’ve demonstrated that with the right leadership approach in terms of demonstrating our requirements, educating our workforce and contractors, and bringing them along in the journey. The results have been very pleasing however safety is a journey, not a destination, so we have to constantly work at it.

What were the environmental achievements?
The project site has been developed in an area that has had considerable historical artisanal mining activities, and legacies. As part of the works we have had to undertake a considerable remediation of historical artisanal works. A considerable environmental achievement has been completing all of the permitting and ensuring we remain in compliance with Vietnamese government regulations while also meeting our commitments under World Bank and IFC principles as part of the original works. The reasons we focus on this are two-fold, one we want to do the right thing and meet our commitments to our stakeholders, additionally, as we look to grow the company, we remain open to being able to attract international financing because moving into those capital markets, there’s a requirement to show you’re meeting international as well as local standards.

Are there examples of how Masan has worked alongside Vietnamese authorities in the project’s development?
We have a number of great examples, starting with the community resettlement process were we have actively engaged with all levels of Government and community. You have to engage at commune level, district level and provincial level while operating under central government rules. Nui Phao is one of the larger resettlement projects undertaken in Vietnam in recent times.

Ultimately we’ll be looking to relocate about 1880 households over the life of the project. For more than 98% of the lands acquired to date, we’ve achieved relocation in a reasonable timeframe, which I think is testament to our ability to work with both the surrounding communities and the authorities to meet the legislative commitments we’ve made.

Next there are the training and development works we have undertaken which require district and provincial input. Prior to commencing operations we ran a 15 month paid vocational traineeship program for about 250 project-affected people who we were looking to take on as fulltime employees. This program was also linked to the land access negotiations. We developed the program in partnership with provincial Department of Labour and Social Affairs. The trainees underwent theory training on aspects of mining and processing and safety, and then they underwent practical training at a number of processing plants in the northern provinces. The program ran for about 15 months, and at the end of it we got 250 employees who were work-ready, which was a really great outcome.

Further programs have been worked through with the authorities with our economic restoration activities including micro-finance done in partnership with a SOE.

These examples show a good degree of interaction with the departments, and the programs have proven themselves as great examples of industry and government partnerships.

How have dealings with the community helped build a successful working relationship?
You always have to engage with your neighbours and this is consistent with the company’s core values of respect, action and results. We will be a long-time partner with the community in Dai Tu district where the current mine outlook is about 20 years. We have regular meetings with all levels of authorities as well as individuals to keep them informed. As part of our communications approach we post information about our activities as they relate to the different communes in conjunction with regular meetings with the respective communes to understand and resolve their concerns. Additionally we have environmental monitoring programs that measure our impact in terms of dust, noise, vibration, and water discharges. This information is shared with the provincial government as they have the mandate for monitoring our activities. There is a formal mechanism for our neighbouring communities to raise issues, which sits outside our regular communication process. Typically we follow a very similar approach with the community as with government, however the government has more regulatory requirements we also have to meet in terms of regular reporting and various statistics. 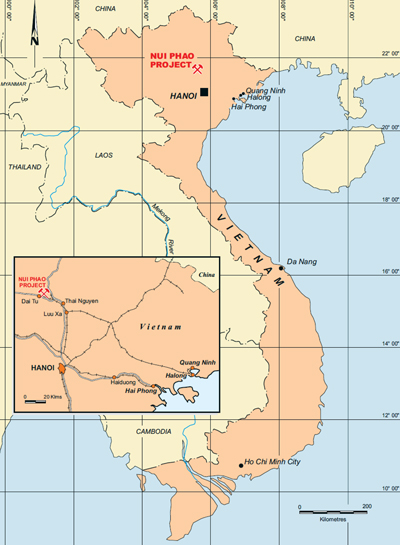 The Nui Phao Project is in Thai Nguyen province in northern Vietnam.

One of the biggest concerns for our communities is in relation to employment. We are committed to maximize local employment as much as we can. At the moment our employment split is about 55%:45% between ourselves and our contractors, with about 2450 personnel employed by the project. About 76% of people employed come from the local Thai Nguyen province and within that about 58% come from the Dai Tu district. A further 15% come from other areas in Vietnam. Ultimately as a Vietnamese company we’re focused on maximizing the benefits locally.

What is Masan currently doing at Nui Phao?
Nui Phao is in production and exporting to various parts of the world - Europe, North America and throughout Asia. We have recently completed a resource reserve drilling program, which we’re confident will add to mine life. The process plant is being optimized and we are doing some construction activities in relation to our joint venture, which involves taking our tungsten concentrates through to various high purity tungsten chemicals.

A billboard containing information about the Nui Phao Project and its benefits.

What are the plans for the mine’s future?
The current reserves enable a 16-year mine life and we’re looking to add to that. The resource/reserve drilling program has been completed, and final results should in by the end of the year. The main aim of this program has been to improve our understanding of the overall size of the ore body, and better understand aspects of the ore body geo-metallurgy. This is necessary because growing our knowledge of the ore body, is what underpins the success of the company.

Is it easy to deal with suppliers in Vietnam?
We found dealing with suppliers an interesting aspect of re-starting the project. Many suppliers out of Australia would state when doing their pitch – ‘This is what we do and we’re a very safe company’. That may have been a differentiator previously, however now, from a customer point of view, you take it for granted that your supplier is going to be safe, provide a safe product, and include any necessary support around the specifics of that product or service that you need to be aware of.

We have really had to work with some of our suppliers to get them to understand ‘You’re coming into a relatively new market and you need to be able to differentiate yourself as you would in any new market against the local offerings’. We’ve had discussions with various suppliers and some are open to changing their approach. In a developed market, there is a well-defined supply chain for everyone to tap into. As you come into parts of Asia that supply chain isn’t as robust across all aspects, and suppliers need to look at how they approach service and product delivering into Asia. Interestingly enough we have a number of examples of industry established suppliers who struggle to think outside of their box and have then lost out to other competitors who were prepared to engage and seek an outcome which best met our needs.

What is your advice for companies looking at doing business with operations in Vietnam?
Re-approaching how they will deliver on the 5 R’s of supply; right product, right availability, right price, right quality and right quantity, not just rolling out their standard formula. In some instances it might be rolling out training programs around the best way to use the product or service. It might be training customers on how to test the quality of the product or service, or just being innovative in your thinking. It might be around how/where spare parts are held or financed. Each product or service has its own application and back-up requirements. It’s very hard to generalize across everything other than engaging with your customer to achieve the outcome. Fundamentally suppliers and contractors need to demonstrate a value proposition. Certainly cost is a consideration, but for the supplier to be able to pitch the overall value proposition, they need to listen then go back and, in some cases, refresh their thinking. This entails listening to the customers’ particular needs, and ensuring your service model delivers against those needs. At its heart the customer requirement hasn’t changed, but some suppliers I think stopped listening during the boom, and in some cases they still need revisit and exercise their listening muscles if they want to continue to be relevant.