ELDORADO Gold is one of few foreign mining companies that have been successful in China - the world’s largest consumer of mineral resources, the world’s primary gold source, a major coal miner and a leading producer of many other minerals. With most large mining operations run by state-owned enterprises, and large amounts of patience, determination and exploration expertise needed, along with a large bucket of cash, it is not hard to see why this is the case.

Canadian-based mid-tier miner Eldorado has three operating gold projects in China – Jinfeng, Tanjianshan and White Mountain – and the Eastern Dragon development project. It also has mining, development and exploration operations in Turkey, Greece, Romania and Brazil. The company’s success to date is based on a low cost strategy, a highly skilled and dedicated workforce, safe and responsible operations, and long-term partnerships with the communities where it operates.

China forms an important part of the company’s global strategy now and into the future and for this reason it is evaluating the merits of pursuing a potential overseas listing on the Hong Kong Stock Exchange in relation to its Chinese business. Eldorado is the largest foreign producer of gold in China and the operations presently produce about 300,000 ounces annually.

Eldorado’s chief executive officer Paul Wright told The ASIA Miner that the company’s immediate focal points in China are the need to extract best possible value from infrastructure at existing operations along with the opportunities for exploration in extensive land positions surrounding these operations. “Year-by-year we have fairly healthy exploration budgets around each site and since we started operating in China in 2006 we have been able to add additional reserves. We aim for continued strong performance at the mines and to continue to add reserves and resources.

“The biggest outstanding item on our list in China is to resolve ongoing permitting delays that have hindered development of the Eastern Dragon project.” This is a high-grade, epithermal, gold-silver vein deposit in Heilongjiang province, northeast China. It is planned to start as a small open-pit mine and then become an underground operation using carbon-in-leach methods to produce gold doré. The project, which is largely developed, is currently on care and maintenance pending receipt of permits.

“The transaction closed earlier this year with CDH Investments brings to the table a credible, significant non-operating equity group which I think will provide additional support enabling us to complete what needs to be done to get Eastern Dragon up and running,” Paul Wright says. “This agreement is a big positive for Eldorado and as the market has understood what this is all about, it has also seen it as positive.” The leading Chinese private equity company has acquired a 20% interest in Eastern Dragon for cash consideration of US$40 million.

“The delays have been frustrating and have tended to stall our growth in China,” he says. “We would like to get this behind us as there are opportunities for a company like Eldorado and we’d like to be able to avail ourselves of these. It is very important to bring Eastern Dragon to account.

“We have three very good operating projects in China, have built very good infrastructure and can only see Eastern Dragon adding to this. The managing director of Eldorado’s Chinese operations, Hailong Xu, has a strong team which is a very good combination of Chinese nationals along with a few expats in areas where they can bring value. It is a very good team that we believe is capable of doing more to grow the business in China.”

Existing operations
Tanjianshan is an open pit mine in Qinghai province in northwest China. It consists of two separate deposits, Qinlongtan (QLT) and Jinlonggou (JLG), although mining at QLT finished in 2009. Ore is processed using a flotation circuit followed by roasting and finished with carbon-in-leach methods. When Tanjianshan began commercial production in 2007, Eldorado became the first North American gold producer to build and operate a gold mine in China.

Jinfeng is an open pit and underground gold mine in southern Guizhou province. It uses BIOX technology and a conventional carbon-in-leach circuit to produce gold doré. Jinfeng’s quarterly and half yearly production figures were higher year-over-year and cash operating costs per ounce were lower mainly due to higher tonnes milled, average treated head grade and recovery rate. Most of the improvement emanated from ore production from the open pit, which resumed full mining operations midway through the second quarter of 2013 after completion of a cutback.

During the six months ended June 30 there were 86,863 ounces produced, up from 50,631 ounces 12 months earlier while in the second quarter there were 45,568 ounces produced compared to 28,889 in 2013.
White Mountain is an underground mine in Jilin province of northeast China. Ore is processed using conventional carbon-in-leach methods to produce gold doré. There were 21,000 ounces produced in the second quarter of 2014 and 47,473 ounces in the first half, up from 17,462 and 38,377 respectively in 2013. Total cash costs for the quarter were $623 per ounce compared to $781 in 2013 and for the first half were $636 compared to $726. Gold production was higher mainly as a result of increased process throughput, higher head grades and improved recovery rates. Cash operating costs per ounce decreased significantly due to higher gold production and reduced operation costs.

The company’s overall global exploration expenses during the second quarter of 2014 fell $6.4 million year-over-year, reflecting changes in the exploration program in response to lower gold prices. In China underground drilling at White Mountain targeted down-plunge extensions in the middle and north ore zones. Detailed geological mapping was conducted over the mine area, and surface exploration drilling programs were due to commence in the third quarter. At Tanjianshan, drilling programs were completed in the quarter at Xijingou deposit and Dushugou prospect, and drilling was ongoing at Qinlongtan North deposit. 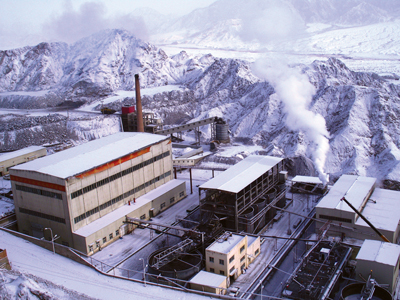 Paul Wright says, “Once we get Eastern Dragon up and running, we think it will be time to look for a new project. Mines don’t last forever, no matter how well they are managed and how prospective they are. It becomes a finite reserve and you need to be replenishing. To date we have been primarily focused around the mine sites, which is the right place to spend money, but with Eastern Dragon behind us it would be the right time to look for what would be our fifth mine in China.

“There are very good mining industry opportunities for domestic and foreign companies in China. The industry today is such that it is not easy anywhere. The challenges may be different from jurisdiction to jurisdiction but the advantage we have in China is a decade of experience which has enabled us to build a team that knows how to identify, assess and manage the risks associated with the business. This is worth a lot to any company.

“As a company Eldorado tends to be patient, which is a bit of an oddity in the mining sector, particularly in precious metals. People talk about long-term strategies but in many cases many companies aren’t managed to achieve long-term aims. We have positioned ourselves to be patient and to afford to be patient - to be meticulous in terms of how we review situations, countries and assets. I would say that a decade of dealing with intricacies of the remains of the bureaucracy associated with the Ottoman Empire in Turkey provided the corporation with a lot of skills necessary to navigate the complexities of operating in China. It’s not a country to rush into and try to do things quickly in a sloppy manner – you will be penalized if you try this and many companies have found this out to their detriment.” 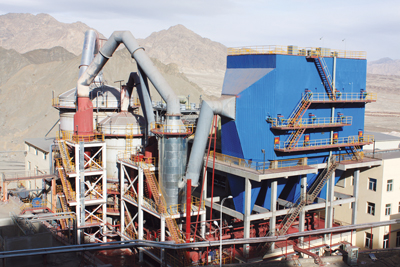 The sulphide ore processing plant at the Tanjianshan operations.

“It is vital to have the right team on the ground,” Paul Wright says. “If you look at our involvement in China – we had a team of four to six based in-country for two years before we made our first investment. These people were not just looking at projects technically, they were also assessing the political and social landscape as to whether in the longer term we could build a multi-mine business. For us going into a new jurisdiction is not about a single mine nor is it a short-term proposition. If you are going to establish the infrastructure then you need to be looking at a multi-mine situation and need to be thinking in decades, not years. To make that decision a correct one it is vital you put the hard work in at the front-end, during the early years.

“Our success can also be put down to the fact that we focus on higher quality assets as well as our proven balance sheet management.” 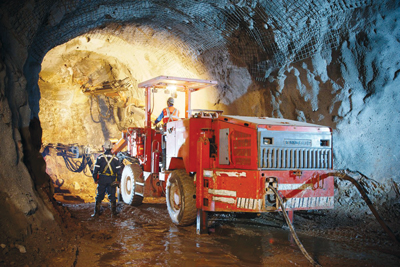 Underground drilling at the White Mountain project in Jilin province.

He says practically speaking, the market for foreign companies in China is quite small. “You don’t have large projects sitting on the shelf for large companies to come in and get involved with as you see in other jurisdictions. The only way to become involved in a large project in China is the hard way – by doing the exploration over a significant number of years in joint venture structures. The larger mining companies generally don’t like to pursue that strategy and have gone to other jurisdictions where it is easier to identify and buy large projects. “There aren’t large, undeveloped projects to buy – you have to be prepared to work from the ground up and work hard for projects that may in the end only be 100,000 ounces per year operations. If you are a company producing five to seven million ounces a year, 100,000 ounce mines simply aren’t going to do it for you, which rules out the major players. 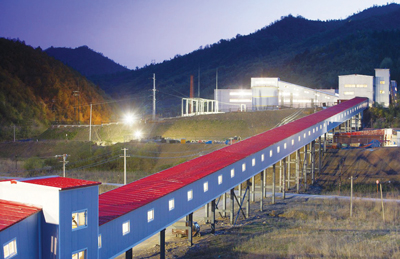 “You also need staying power and at the other end of the scale the junior mining companies don’t have the balance sheet to stay the course. You are, therefore, left with a very small group of mid-tier companies that have the financial strength, staying power and the ‘smarts’ to be able to navigate this type of jurisdiction.

“If you look at the gold industry in particular, that mid-tier sector is very small and in most cases the companies that have been successful have already picked their jurisdictions. For instance, Randgold has carved out a very good existence by specializing in West Africa and Agnico Eagle has done well in the Americas. The number of companies of that ilk with the technical and financial strength as well as the wherewithal, is very few. There is room for further foreign mining involvement in China but I’m not sure where it will come from with the mid-tier sector being so small and companies of the right ilk few and far between.” 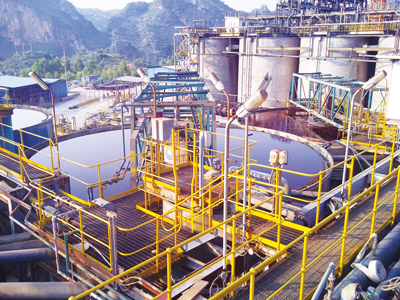 Processing facilities at the Jinfeng project.

Low costs are key
Paul Wright says, “Usually the gold industry is frequented by very long winters and short summers. In recent years we have all enjoyed an exceptionally long summer and one can argue whether it is now winter or just a cool snap. Owing to the long summer a large part of the sector was lulled into a false sense of security, including the belief that gold prices in excess of $1700 per ounce were here forever. Of course, it’s not like that now and I don’t think we will see prices like that again in the near term.

“From our perspective we’ve always insisted that we keep our cost of production in the lowest quartile and then it doesn’t matter as much if the gold price is up or down. If you have a proven balance sheet and lower quartile production costs, you will be fine. If you are chasing high cost projects and your costs are in the third quartile, unfortunately when winter comes you are likely to freeze and we are seeing some of this occurring now.”