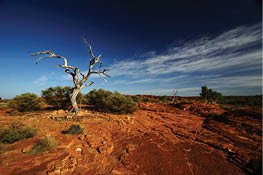 The Distal Footprints project will focus on the challenge of uncovering mineral wealth in the unique Australian landscape.

AUSTRALIA faces increasing global demand for its resources during a time of rising exploration costs, diminishing success rates and increased processing costs. The challenge for industry, research bodies and government agencies is clear - the focus needs to move from domestic competition to domestic collaboration, so that Australia can become more competitive internationally.

Simply put, Australia needs to step up and be more innovative by bringing together the best scientists and world-class research infrastructure with industry and government to solve tomorrow's resources challenges today.

The National Resource Sciences Precinct, or NRSP, does exactly that. It is a CSIRO, Curtin University and UWA collaboration connecting the world's best researchers with industry and government to tackle some of the most complex challenges facing the resources industry. At a launch in April this year, the NRSP announced Transfield Services' CEO and managing director Graeme Hunt as its inaugural chair.

"There have been areas of collaboration between the three institutions before but there hasn't been an umbrella body that strives to make sure there is alignment and transparency about what each of them is trying to do," says Graeme Hunt. "Between its foundation partners, the NRSP hosts more than 400 FTE research staff all addressing the future needs of the global resources industries. It is supported by millions of dollars worth of advanced resources-oriented research infrastructure."

This pooling of expertise centred in Perth, Western Australia, capitalizes on the concentration of multinational resource companies located in this recognized mining hub, as well as leading research capabilities. The location is also well-situated for increased engagement with the growing Asian market.

The new collaborative approach of the NRSP will see an increase in large-scale infrastructure projects developed in Perth and around Australia while reducing duplication of funding and effort for resource science initiatives.

"The foundation partners, under the auspices of the NRSP, have already attracted more than $50 million in funding for research projects focused on the resources sector. The projects include an Advanced Resource Characterization Facility (ARCF) and a ground-breaking Distal Footprints project that aims to improve mineral exploration to discover mineral wealth in remote regions that have previously been difficult to search," Graeme Hunt says.

With the support of a $12.4 million grant from the Science and Industry Endowment Fund (SIEF), the NRSP is developing an unparalleled ARCF which will increase the quantity and quality of geoscientific information gained from drilling. This information will form the basis for higher ore deposit discovery rates, and earlier, more accurate resource definition in the minerals industry.

The new Nano-scale Secondary Ion Mass Spectrometer (NanoSIMS) will enable researchers to understand large-scale phenomena, such as evidence of mineral deposits, through the chemical processes occurring at the nano-scale.

"The NanoSIMS is highly automated and versatile. It can be used for a broad range of applications, including mineral-fluid interactions and determining trace elements of ore deposits in rock," Graeme Hunt says.

Traditionally, mass spectrometry requires a large volume of material to be extracted from a sample but the NanoSIMS can examine smaller samples and map up to seven elements simultaneously. 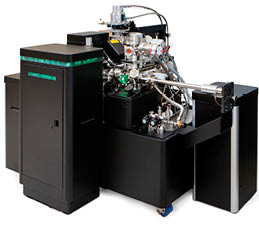 The Atom Probe at Curtin University is the first machine of its kind to be dedicated to resource characterization in Australia.

The Geosciences Atom Probe provides high-resolution three-dimensional characterization of atom distribution in very small volumes of natural materials. The technology has previously been used in the fields of materials science and nanotechnology but the application to geosciences is in its infancy.

"In fact, this will be the first machine of its kind to be dedicated to resource characterization in Australia," Graeme Hunt says.

Recent technological advances have enabled it to be applied to geological materials, to examine changes in the composition over incredibly small (nanometre) distances.

The Maia Mapper, being developed by and housed at CSIRO, will be a landmark instrument that does not currently exist anywhere else.

The Maia Mapper is a high-throughput detector system which can be used to produce high-definition images with microscopic detail in real-time. Combining rapid analysis with high-resolution, it will be able to map elemental variations in geological samples.

"The NanoSIMS and Geoscience Atom Probe are expected to arrive in 2015 and the construction of Maia Mapper is expected to be completed by 2016," Graeme Hunt says. "The ARCF's concentration of advanced instruments and expertise will establish it as a global hub for 'metre-to-atomic scale' analyses."

Combined with four-dimensional data integration provided by the Pawsey Supercomputing Centre, the ARCF will be a ground-breaking research facility that will provide a resource focus unmatched anywhere in the world. For industry this will mean more efficient mining and higher production yields.

The Distal Footprints project aims to revolutionize the way we search for resources in Australia with a team of the nation's best scientists charged with improving the diminishing success rates of minerals exploration. Focusing on the potentially lucrative Capricorn region of Western Australia, the $16 million project seeks to develop a new way of discovering mineral deposits in the area.

"The Distal Footprints project is about addressing the fundamental limitations to mineral discovery," Graeme Hunt says. "Although there are potentially huge mineral deposits under its thick surface, the Capricorn region is a poorly explored and poorly understood area. By bringing together some of the best scientists in Australia, the project will tackle some of the technical risks and help industry to unlock this vast potential resource.

"Searching for underground resources is complex and expensive. Australia in particular has a unique geological make-up with a blanket of cover built up over millions of years making it difficult to detect deposits and therefore develop new mine sites. The project will deliver new data, interpretations, understanding and technologies to help discover mineral wealth in regions that until now have been difficult to explore."

He says, "This ground-breaking approach to exploration aims to expand the search area used to identify the markers that point to large mineral deposits. We will be able to arm industry with the information they need to detect if resources are nearby, and in what direction and how deep they are.

"Distal Footprints are signatures we might expect to find around an ore deposit from distances of up to several tens of kilometres."

Using isotopic and trace element composition – at regional-scales on bulk samples and at micro-mscale in individual minerals – the project will determine the distal patterns and the minerals that host them, through advanced micro- to nano-scale analyses using NRSP's advanced infrastructure.

The new capability will increase exploration certainty in Australia making it an attractive destination for investment, ensuring that the resources sector remains globally competitive.

The project is supported by funding awarded under the SIEF, as well as contributions from the WA Government's Minerals Research Institute of Western Australia, industry, the Geological Survey of Western Australia and the NRSP foundation research partners.

"Ensuring that Australia's resources sector can compete internationally is of paramount importance to the industry and the economy," Graeme Hunt says.
By supporting new research and technology development as well as ensuring that ongoing research priorities are based on real and current industry challenges, the NRSP is helping to tip the scales in the right direction. To find out more about how to get involved, please email [email protected] 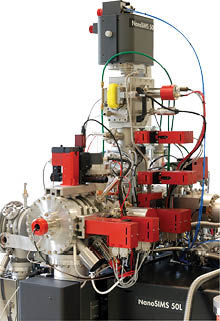 The new NanoSIMS, at UWA, will significantly improve the capacity to determine mineral ore deposits and increase processing productivity.

ABOUT GRAEME HUNT
Graeme Hunt has almost 40 years' experience in the metals, mining and bulk transport sectors, including years with BHP Billiton where he held positions including president iron ore, president aluminium and president uranium. He was also managing director and CEO of Lihir Gold.