An interview with Tenova Mining & Minerals' chief technology officer John Riordan, who is based in Perth, Western Australia 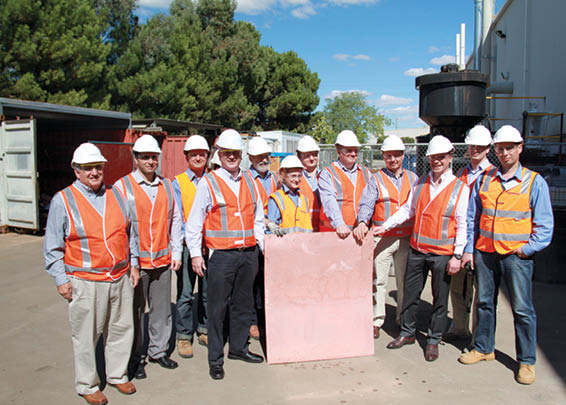 The first copper cathode produced in laboratory test work in Perth, Western Australia, to confirm in principle the process flowsheet for a major copper project in Russia.

How does Tenova Mining & Minerals serve the global mining industry out of the Australian offices in terms of technology?
Tenova Mining & Minerals' capability to draw on the world-class technological expertise across its global organization is one of its key differentiators in being able to deliver a solution that fully satisfies the client's needs.

In the first project, set to mine Russian's largest untapped copper resource, co-ordination of the laboratory test work and pilot plant was carried out by Tenova Mining & Minerals' Australian operation, with the aim to produce copper cathodes from the ore and confirm in principle the process flowsheet developed for the project. Subsequent to this successful test work, Tenova Bateman CIS was appointed Russian General Designer
Tenova Bateman Australia designed the process flowsheet for the second project, for which Tenova Bateman CIS was appointed General Designer for the basic engineering design phase. The process plant will be a world first, as it will extract platinum group metals (PGMs), copper (Cu) and nickel (Ni) from the ore using a unique impregnated Cu-Ni platinum ore concentration method.

Combined gravity and flotation will be employed, allowing for more than 80% PGM recovery into bulk concentrate, which will be the world's highest recovery for this ore type. While these are proven unit processes, they have not been implemented in combination before in a single PGM recovery project, either in Russia or abroad.

The mining industry is constantly changing which means Tenova Mining & Minerals (TMM) must constantly be developing new technologies to better equip the industry for these changes. What changes are impacting the mining industry at present and, therefore, driving technology development?
Worldwide consensus is that significant productivity and efficiency improvements are top of the 'must-do' list for the mining industry, as climbing costs coincide with a downturn in cyclical commodity prices and a decline in productivity over the past decade, which has resulted from the industry's pursuit of volume growth during the recent supercycle. For continued sustainability, simply cutting costs is not an option, with the industry needing to both regain lost productivity and at the same gain new productivity improvements. EY in its Business risks facing mining and metals 2014–2015 quotes, as an example, the fact that "labour productivity in Australia has declined by roughly 50% since 2001 and in the US coal sector, labour productivity has declined by nearly 30% from 2009 to 2012."

At the same time, the easy-to-mine deposits are being exhausted and mining companies are faced with the need to enter more remote regions, go to greater mining depths and mine the lower ore grades.

Innovation is the key to meeting these challenges with worldwide developments towards more efficient, more powerful and easier to transport and erect machines. As a result we are increasingly seeing a move towards greater automation and the development of larger, more powerful and longer lasting equipment, while logistics and erection challenges in remote sites are hastening the trend towards modularization.

In the flotation industry, as an example, Tenova Delkor has increased the top size of its BQR range of cells to 150 cubic metres and development is under way towards even larger flotation cells to meet the increasing demand in the minerals processing industry. Tenova Delkor is also seeing the next evolutionary stage in flotation technology in the market place, with fully automated flotation cells becoming more common, aided by smart control, online analysis and advances in software.

Access to power and water is becoming ever more problematic as costs increase and resources are diminished, particularly in developing countries where mining companies compete with governments and communities for scarce resources. The pressure is therefore intensifying for recycling and reuse of water wherever possible, as well as for more efficient use of energy and/or the application of other alternative power generation methods. For example, mines are increasingly turning away from the energy intensive mills to the use of high pressure grinding rolls in their crushing circuits. Developments such as the multiple preheater technology from Tenova Mining & Minerals furnace specialist, Tenova Pyromet, are also finding increasing application. This technology uses furnace offgas to heat the raw material feed for ferroalloy furnaces, which means efficiencies are improved and the power needed to produce each ton of product is reduced.

With increasing environmental pressure and a shift towards low-carbon operations, Tenova Pyromet's recent contract award from United Silicon for a silicon metal furnace is notable not only for the fact that it is the first silicon metal furnace to be established in Iceland; but by combining Iceland's clean energy approach to power generation and Tenova Pyromet's advanced technologies, the silicon metal plant will have one of lowest carbon footprints in the world too.

Can you provide some examples of the technological developments coming out of TMM's Australian offices now and what they will mean for mining in the future?
As a global group, technology development is carried out across the globe, with Tenova Delkor probably being the most active in Australia in this regard of the Tenova Mining & Minerals businesses. For example, enhancements to the Tenova Delkor thickener technology include developments such auto dilution, a sheer thinning device for the underflow and a unique feedwell design, which allows for high dilution volumes and efficient mixing and stilling, as well as incorporating a scum recovery system. This feedwell design has a proven track record of reduced flocculant consumption.

For the screening industry, Tenova Delkor in Australia has enhanced and improved on a technology originally developed in South Africa. The novel belt linear screen (BLS) flood detection device detects when a waste (trash) removal screen is overloaded and sends a signal for corrective action to be taken. As flooding of screens is a common problem, the device has the potential to significantly improve productivity on a wide variety of processing operations.

Other enhancements to the Tenova Delkor Belt Linear Screen include a 40 square metre belt linear screen and the majority of its designs are now containerized to reduce freight to mines in remote locations.

While Tenova Bateman Technologies in Israel is responsible for solvent extraction (SX) technology developments, interestingly, a major focus for its future process development in the lithium industry, the LiSX technology, was in response to the need of an Australian client. The LiSX process will revolutionize the way lithium is produced and is the most attractive alternative to the expensive traditional method, which requires high energy costs, a dramatically bigger footprint and high residence time. It also allows versatility in lithium salt production, in an industry where the battery composition is constantly changing. LiSX, based on SX, and combined with membrane technology (LiP) for the pre-treatment of the initial brine, is a viable process for any type of lithium feed stream, whether originating from hard-rock, from salars, from lithium batteries or even waste solution containing 100ppm lithium or less. Once running, LiSX can be adjusted at most, within hours, to produce any required lithium salt.

What factors have led to Australian technology being so important for the global mining industry?
Australia has a strong track record of developing innovative technology solutions to the challenges facing the local mining industry. Some of these challenges may be specific to Australia but many are not and the solutions therefore often enjoy a wider application than was the initial intent.

Australia punches above its weight when it comes to the number and quality of technologies it has developed and continues to develop for mining. These cover the full spectrum of the industry from sophisticated exploration and mapping techniques, through to advanced mining, processing and metal production technologies that bring safety, environmental, productivity and energy efficiencies to the industry. Australia is well-endowed with mineral resources that have given rise to a strong mining tradition, which in turn has generated substantial wealth.

An important part of that tradition is the commitment of the mining industry, supported by state and federal governments, to re-invest part of the revenue in research and development. Revenues from mining have funded organizations like the CSIRO, ANSTO, AMIRA, various universities and company owned R&D and innovation centres. Generally, the collaborative nature of the R&D efforts made sure that money was well-spent and the results shared, rather than hoarded, for the common good of the industry.

Tenova Mining & Minerals attributes technological innovation to be the foundation of its competitiveness. Have there been any recent developments in fostering a culture of innovation within the company?
An annual Tenova Innovation Award was launched across the Tenova group in May 2014, with the aim of further fostering and promoting a culture of innovation within the group. A number of exciting ideas and proposals have been received and are being evaluated against criteria such as internal and external benefits, innovative content, added value to the Tenova group and probability of success.