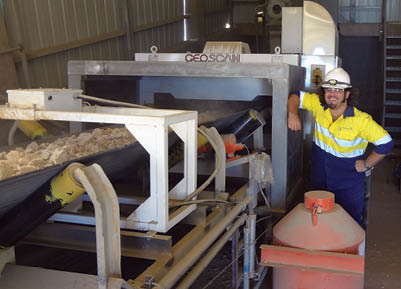 REAL-TIME analysis technologies for conveyed bulk materials have been used in the coal industry since the early 1980s. In the last 10 years Scantech, an Australian company specializing in on-conveyor analysers, has introduced this analysis to the minerals industry.

Dual Energy Transmission (DUET) is the most commonly used on-belt ash measurement technique for coal and Scantech's Coalscan 2100 makes use of this. New developments in DUET technology permit coal depths up to 400mm to be measured.

Scantech's on-conveyor coal elemental analysers, known as Coalscan 9500X, analyse the entire stream, avoiding not only the operating and capital costs of sampling, but also the sensitivity of older technologies to variation in ash mineralogy. This technology is no longer sensitive to variations in bed depth or layering of different coal types. As well as measuring ash, this technology measures ash oxides, total sulphur and many other parameters useful for efficient plant control.

In minerals industries the technology is used in the Geoscan analyser with successful installations used to measure grades of iron ore, phosphate, copper, manganese and lead-zinc. There have been four Geoscan generations with the latest requiring minimal maintenance, having very low levels of external radiation and providing drift-free analysis.

A South East Asian copper-gold operation identified the need for plant feed analysis in real-time to improve control of copper metal units entering its processing plant due to a limited leach circuit capacity for dissolved copper metal. The mining operations recovered ore from several open pits where grade varied between less than 1% and greater than 8%. Mine planning information was used to determine the expected average copper grade for each blast, which was then hauled to the designated ROM stockpile and blended with ore from other stockpiles into a crusher and conveyed to a mill. The plant was unable to utilize a slurry analyser on the milled ore as acidic solution added to the mill resulted in copper being taken into solution. Slurry analysis would not have been suitable to measure the copper in solution thereby ruling out this option.

A Geoscan analyser was commissioned in early 2008 on the crushed ore conveyor. The copper content in the feed is controlled by adjusting the blend from the ROM stockpiles about every 30 minutes as needed.

Stockpiles often contain zones of low and high grade material resulting in large variations in average feed grade which can result in times where copper metal content exceeds the leach plant capacity. When this occurs excess copper is not recovered, while at other times a lower than expected copper metal throughput results in the leach circuit being under-utilized. The economics of these extremes and likelihood of their occurrence resulted in the need for improved process control of plant feed quality. It was estimated by metallurgical staff that the analyser payback would be in the order of eight weeks if these situations could be prevented.

Through experience with the analyser the site also found benefits in knowing the sulphur and iron content of the ore as pyrite was a requirement for leach process performance. Pyritic ore was able to be added when iron and sulphur levels were below the desired target range. The Geoscan proved reliable and effective and continues to be an integral part of plant operation.

These technologies can be combined with the microwave moisture monitor, so that a complete analysis of the material is available in real time. Scantech produces standalone moisture monitors.

The TBM 210 was developed about 20 years ago and is installed at many sites and in different applications monitoring moisture levels in shipments, optimizing washery performance and maintaining appropriate levels for dust suppression. Moisture monitors are widely used in iron ore installations in South Africa and Australia. The TBM 230 has recently been introduced for denser materials and deeper bed depths up to about 600mm.

On-belt analysis allows more efficient use of the resource, more effective process control and more cost effective methods of mining, processing, utilizing and disposal. On-belt analysis should be viewed not simply as an alternative to laboratory analysis. Scantech, working with local agents, has found that the most beneficial on-belt analyser installations are generally those where the user realizes the advantages real-time analysis can bring.