DETECTING SMOKE BEFORE THE FLAMES 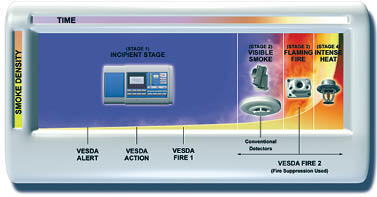 WHERE there's smoke, there's fire, but when it's only smouldering it can be hard to detect. A Melbourne technology company is monitoring mines around the world for the earliest signs of fire. Xtralis's Very Early Smoke Detection Apparatus, or VESDA, can save lives and property.

The concept behind VESDA started in the 1970s when the CSIRO was asked to evaluate fire detectors for telephone exchanges. None of the equipment performed as well as their own test instrument which was previously used to monitor bushfires.

The device they built from it was so sensitive that industry was initially reluctant to get involved, due to a fear of false alarms. But eventually IEI Pty Ltd – later to become Xtralis – succeeded in making a small, cheap detector that was quickly adopted in Victoria.

VESDA is an Air-Sampling Smoke Detector (ASD) and works by actively breathing in air, rather than waiting for smoke to waft up to it. Larger dust molecules are then filtered out and a laser is used to detect the smoke particles.

Variable alarm levels mean that it can be set to warn of a fire that is merely smouldering, long before it bursts into flame, thus buying time for early verification and response.

As the pioneer of this technology, Xtralis is now one of the world's leading manufacturers of ASD systems, with global offices and a branch still based in Victoria.

Their VESDA Laser Industrial and ECO gas detector products are specially designed for harsh environments and are used in mines in Australia, South Africa and Noumea while in Alberta, Canada, Suncor Energy uses VESDA to prevent fires at its huge, open-cut oil-sand mines.

Dr Peter Meikle from Xtralis says, "We've combined our technological expertise and 25-plus years of industrial field experience to provide very early warning smoke detection for the most challenging environments."