News regarding the gold market, including the impact of war in Ukraine and developments in the rest of the region.

According to GlobalData, one of the impacts of Russia invading Ukraine on global commodity markets has been a rise in prices of several metals including gold, due to its position as a safe haven, and nickel, due to supply concerns.

In the equity markets, shares of several mining companies operating in Russia and Ukraine such as ALROSA, Evraz, Ferrexpo and Polymetal International, were slashed and the ruble depreciated against the U.S. dollar as the war began.

In retaliation, Japan, the EU, the UK, and the United States have introduced sanctions against Russia. However, so far mining operations do not appear to be impacted.

Polymetal and Kinross both reported that their operations remain unaffected and continue as usual. Kinross stated that the majority of procurement is within Russia and, “Approximately 98% of the employees of Kinross’ Russian subsidiaries are Russian locals, and given the ice road supply season, its operations have a full year of supplies on hand.”

It also refines its gold produced in Russia within the country. Polymetal has also advised that: “Contingency planning has been initiated proactively to ensure business continuity, including the selection of key equipment suppliers, liquidity management, debt portfolio diversification and securing sales channels.” The company has reiterated its production guidance for the year.

However, there is expected to be a significant impact on the mining industry’s supply chain, as Russia is among the top three producers of diamond, gold, platinum group metals (PGMs), and nickel. It is also a key supplier of seaborne and met coal (to European markets), iron ore, and aluminum.

As for Ukraine, there is expected to be disruption in the supply of coal, iron ore and uranium. For instance, Arcelor Mittal has ceased operations at underground iron ore mines in Ukraine while slowing down production at Kryvyi Rih’s steel plant.

In other news around the region:

Aurelia Metals has temporarily idled some production at its Dargues gold operation in southern New South Wales due to a significant rain that is causing flooding in the region.

The miner said the suspension is a precaution, as the rain has impacted both the underground mine and surface infrastructure, along with the mine’s tailings storage facility. While the TSF has an emergency spillway, the company has chosen not to add further water to the facility as it has reached its operational storage capacity.

The underground mine is still operating, but on a restricted basis.

Aurelia officials said it cannot determine the timeframe to return to normal operations, as it will depend upon weather conditions. Additionally, it cannot ascertain the full impact to the property at this time.

“We take out environmental responsibility very seriously. We have notified the appropriate regulators about the impact of the rainfall and continue to work closely with them to manage the situation,” MD and CEO Dan Clifford said.

“Rainfall is forecast to diminish over the coming days, which will allow Aurelia to determine and evaluate an appropriate path to resume ore processing operations.”

Aurelia purchased Dargues, located southeast of Canberra, in December 2020 from Diversified Minerals for A$190 million. First gold concentrate was shipped from the conventional bottom-up longhole stoping mine in June 2020.

The custom unit, a Russell 7 seven-axis, 6000-kg capacity machine, will be accepted by the miner at a ceremony this month at the RME global headquarters in Toowoomba, Queensland. It will service Northern Star’s new SAG mill at the Thunderbox project in the North Eastern Goldfields of Western Australia.

Northern Star is also the proud owner of six other Russell MRMs, including the 400th, commissioned in 2018 at the Kanowna Belle project. That machine replaced a Russell MRM that had been in operation at Kanowna Belle for 25 years.

The miner purchased its first MRM, the fifth ever (MRM005), about three decades ago for the Kanowna Belle operations.

The Russell 7 is RME’s signature model; sold worldwide, it features RME’s Insideout technologies to enable placement and removal of grinding mill liners without any crew working on the charge inside the mill, which can greatly reduce hazard exposure for personnel.

“Since the introduction of the very first Russell 7-axis MRM in 1992, traditional mill relining times have been quartered and many health and safety hazards have been eliminated,” said chief customer officer Cherylyn Russell.

“Mill relining is the most specialised maintenance task in the mineral concentrator process and often dictates the length of shutdowns. RME’s innovative, customised, robust equipment helps increase mine site profitability, all while improving the safety of the working environment.”

RME operates in 64 countries and has 12 international sales and service centres.

Perth-based gold producer Wiluna Mining has confirmed the first shipment of its concentrate from its complex in the Northern Goldfields to two off-take partners, Polymetal International and Trafigura.

The shipment included 500 wet tonnes, with 14 bags each weighing approximately 2 wet tonnes loaded to each of 20 containers and delivered by Qube Logistics to the Port of Fremantle.

The concentrate was bagged at Wiluna and stockpiled before being loaded into the 20 shipping containers and transported by road train and then by rail to Fremantle. The initial containers will be shipped to Vladivostok in Russia; currently, 12 of the 20 containers have been loaded with concentrate and are on route to Perth from Wiluna.

The company said its concentrator has been performing at or above nameplate throughput capacity. To date, over 1,100 bags of concentrate, or about 2,150 wet tonnes, have been produced and bagged.

“Now that this initial delivery and shipment has been confirmed the company plans to ship the concentrate out at a regular frequency, gradually increasing the size of each shipment,” said executive chair Milan Jerkovic.

“We look forward to regular shipments which will greatly increase our revenue and assist in financing the expansion of Wiluna to becoming a top 10 ASX-listed gold producer in the next few years.”

The company owns 100% of the Western Australia operation. 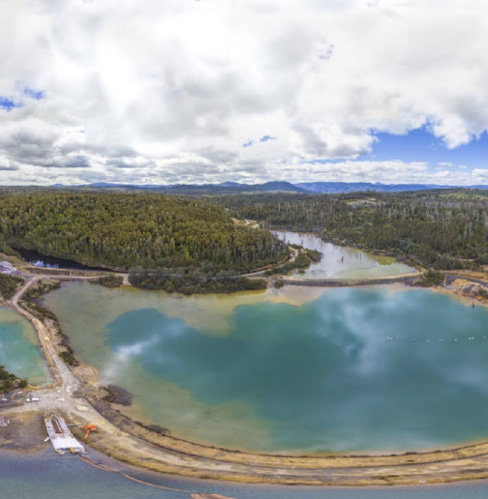 The companies had signed a memorandum of understanding late last year.

EnviroGold said the execution of the transaction cements a major growth catalyst for the company, paving the way for finalisation of project financing negotiations and materially advancing its accelerated pathway toward commercial production of precious metals (gold and silver), clean energy metals and battery metals (copper, lead and zinc) in 2022.

“[This] represents the achievement of a strategic milestone for EnviroGold Global on our journey to producing precious, critical and strategic metals at seven major projects by 2025,” said Dr. Mark Thorpe, chief executive of EnviroGold.

A historical JORC mineral resource estimate completed in November 2020 for NQ Minerals, the parent company of Hellyer Gold Mines, reported an estimated 6.37 million tonnes of measured and indicated mineral resources at the Hellyer mine and 1.21 Mt of inferred mineral resources with gross metal grades of 2.60 g/t Au, 94 g/t Ag, 2.33% Zn, 3.01% Pb and 0.19% Cu.

Bond, who will also serve on the gold producer’s board of directors, was most recently finance director and chief financial officer for Newcrest Mining between January 2012 and January 2022. He has extensive global finance and resources industry experience and has held a number of senior executive roles across Australia as well as Europe.

He was selected following an extensive executive search by OceanaGold and will replace Scott Sullivan on the effective date as Sullivan once again becomes chief operating officer.

OceanaGold’s collection of established operating assets includes the Didipio mine in the Philippines; the Macraes and Waihi operations in New Zealand; and Haile gold mine in the U.S.

Aeris’ Executive Chairman Andre Labuschagne said, “The Constellation drilling program continues to deliver excellent high-grade copper and gold assays. The latest assay results from the drilling within the current Mineral Resource continues to demonstrate that the near surface section of the deposit contains exceptionally high-grade copper and gold mineralisation. This provides the potential for significant early cashflows from open-pit mining.

“The latest drilling below the current Mineral Resource was focused on the southern margins of the deposit, with assays also showing both good copper and gold grades. A characteristic of the known copper deposits on the Tritton tenement package is continuity down plunge. The latest down-hole EM surveys have traced the sulphide mineralisation 1,100m down-plunge and below the current deepest drilling. By comparison, the Tritton deposit extends more than 2,000m down-plunge.

“Constellation continues to deliver above expectations and is shaping up to be a future baseload ore source for the Tritton Processing Plant as we target extending the Tritton Copper Operations beyond the end of the decade. With our strong project development pipeline of high-grade copper deposits we have a conceptual pathway to increase copper production at Tritton materially above current production levels,” Labuschagne concluded.

Driven by strong performances from its Africa and Middle East, and Latin America regions, Barrick’s production in 2021 was in line with guidance for the third successive year, the company said. The company also more than replaced its gold reserves net of depletion at a better grade.

Announcing the annual results, the company said its reserve replenishment was attributable to continued brownfields exploration success and it was extending its drive for fresh discoveries into new prospective territories. Among other initiatives, it has set up a specialist Asia-Pacific team to identify and evaluate opportunities in the region.

Free cash flow from the operations remained robust and at the year’s end, net cash stood at $130 million after the record cash distribution of $1.4 billion to shareholders. The fourth quarter dividend was increased by 11% to 10 cents per share.

Under the company’s new dividend policy, a base dividend will in future be coupled to a performance dividend linked to the net cash on the balance sheet. The board also approved a share buyback program of up to $1 billion, given our belief that the shares are trading in a price range that does not reflect the value of the company’s mining and financial assets and future business prospects.

“By any measure, Barrick is clearly the stand-out in its sector,” Bristow said. “We have what is undoubtedly the best asset base, with six Tier One11 mines, and more waiting in the wings. We have a long record of exploration success and a high-quality target pipeline. In an industry running out of raw material, we keep expanding our reserves. Our strong balance sheet will fund our investment in growth projects. All our mines have 10-year business plans, based not on wishful thinking but on geological understanding, engineering and commercial reality,” he said.

Bristow said Barrick’s 10-year production forecast was based solely on its existing mines and did not take into account the many real growth opportunities that were within its reach. In addition to the potential for further exploration success, the company is advancing its pipeline of large growth projects, including Donlin Gold, Pascua-Lama and Norte Abierto, while at the same time working on the resumption of operations at Porgera, currently penciled in for July this year.

“All Barrick’s mines have earned their social license to operate, and we work hard to maintain them,” he said. “Sustainability is at the heart of our business, and it’s not a virtue-signaling exercise. Caring about the people and the environments impacted by our operations is a moral imperative, but it also makes good commercial sense, as Barrick’s partnership philosophy has proved time and again.

“This year we’ll again be publishing a detailed Sustainability Report which, among other things, objectively rates our performance against all critical ESG metrics. We’re in the 95th percentile of the Dow Jones Sustainability World Index and in the top 5% for environmental policy and management, mineral waste management, closure and social impact,” he concluded.