News and trends in China, Taiwan, Korea, Japan and Mongolia.

There have been a number of recent developments in China, Taiwan, Korea, Japan and Mongolia. For example, BHP is seeking to create the world’s biggest iron ore hub.

BHP Group’s start-up of production at its $3.6 billion South Flank project in Australia – combined with existing operations at the site – will create the world’s biggest iron ore hub. It may also help temporarily cool a hot market.

Iron ore futures were trading below $200 a ton after China’s cabinet expressed concerns about the surge in prices, calling for more effort to curb “unreasonable” gains and prevent any impact on consumer prices. The meeting, chaired by Premier Li Keqiang, also called for a crackdown on speculation and hoarding.

Commodities have tumbled as international markets are gripped by inflation fears and the authorities in Beijing continue to try to jawbone and manage prices lower.

South Flank has been built to replace the depleting Yandi mine – and together with the existing Mining Area C – will form a hub with annual production of 145 million tons a year. South Flank’s higher quality product will also lift the average iron ore grade across BHP’s Pilbara operations. In the short-term, there was potential for a squeeze higher in BHP’s ore exports as South Flank and Yandi operated in tandem, although the overall physical impact on the market was likely to be small, said Peter O’Connor, mining analyst at Shaw & Partners.

The start of production of 80 million tons a year at South Flank, matching Yandi, comes at a time when top exporters Australia and Brazil have been challenged in meeting strong demand from Chinese steel mills. Pilbara shipments were down 6% in April compared to the year-ago period, while Brazil’s exports were flat, according to Bloomberg Intelligence. BHP’s current guidance is for annual production at the upper end of its range of 276 million to 286 million tons. 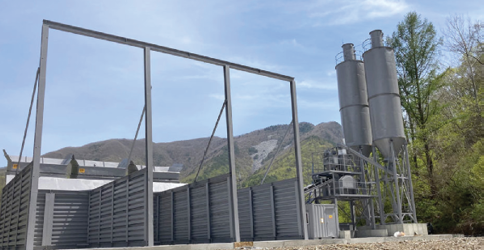 Almonty Industries Inc. updated progress at its Korean site. The concrete batch plant is now completed. This plant will provide service to all underground mine development and to the surface construction.

The renovation of the administration office in the town of Sangdong is completed. Electing to renovate the old Sangdong post office instead of building a new construction on the mine site saved the company more than US$500,000 and compiled better with its ESG in having an actual presence in the town, which allows more direct access to the company for the local community.

The site levelling, road and drainage diversion can now be completed with all permits in place. This will commence in May 2021. Originally the company had intended to conduct the road and drainage diversion in April but on further cost analysis it was established that by also including the site leveling the company would save a further US$300,000 by utilising the same company to do all three items at the same time rather than incurring mobilisation and demobilisation costs twice.

Two members of its Portuguese geology/mine development team have now returned to Portugal after a five week stay in Korea. The 12,500-drilling design program for Almonty Moly has now been completed. It was decided an in person visit by the Almonty Portugal team was warranted to ensure this program was researched and designed to the highest possible standard to ensure maximum transparency for its 43-101 and JORC reports. The company will now move forward with this confirmation drilling.

Almonty Chairman, President and CEO Lewis Black commented, “Securing the best financing was paramount for all shareholders. But now we must ensure that we build smart and cost efficiently. The great upside value secured with the financing we have obtained must now be protected during the build phase. The Almonty team is first and foremost a five-generation operational team and this will serve all shareholders well in maximizing the funding and value we have secured. Our approach has always been to analyse if we can do things better and more cost effectively; to make every dollar count. During the whole build process and into operations we will continue to constantly look to remain lean and efficient. We now start an 18-month journey of construction and transition.”

Aspire Mining Ltd focused on advancing site engineering and logistics solutions for its Ovoot Coking Coal Project in Mongolia as it sat out the COVID-19 pandemic lockdown.

The company remains confident that the local community is supportive of mine development and is awaiting the first opportunity to reconvene a meeting required to present its detailed environmental impact assessment (DEIA) for comment and acceptance.

The final draft of the report has been completed but there is a regulatory requirement for consultation with and approval by the local community before it can be submitted to the Ministry of Nature, Environment and Tourism (MNET) for final approval.

The Ovoot Coking Coal Project contains a JORC 2012-compliant total coal reserve of 255 million tonnes of high quality (fat) coking coal, which can be used to blend with other coking coals to produce coke, an essential component of producing steel using the blast furnace production route.

This type of coal is in increasing demand in China, Mongolia’s southern neighbour, particularly as China’s relationship with Australia is strained which impacts the amount of coal imported from Australia.

The vendors, who submitted these proposals, included reputable and experienced firms from Mongolia, Europe, China and Australia, as well as combined national-international consortium submissions.

At the end of the quarter, the evaluation process to select vendors to complete both FEED studies was in progress and a separate announcement will be made on the award of these contracts in the current quarter.

As correct tractor selection is a critical aspect to minimise transportation unit costs, a leading Australian logistics engineering specialist is evaluating the performance of various potential tractors to be utilised across the intended route between the mine and rail terminal.

Key areas of focus include determining the maximum gross combination weight that each tractor can pull across the route within the target timeframes and the expected fuel consumption.

For each tractor, key configuration details such as final drive ratios are also being investigated.

Output from the study will also be used as input into trailer design (targeting payload efficiency via optimising trailer combination within defined maximum gross combination masses) and final road design (where trade-off between road capital costs and transportation operating costs can be made).

Having avoided community transmission of COVID-19 until late in 2020, Mongolia is now battling the significant spread of COVID-19 infections with high case numbers, with Tsetserleg soum, Khuvsgul aimag, officially confirming its first cases of COVID-19 on 11 March 2021.

As part of COVID-19 control measures, the Tsetserleg soum and Khuvsgul aimag are currently prohibiting entry of non-residents to their respective territories. 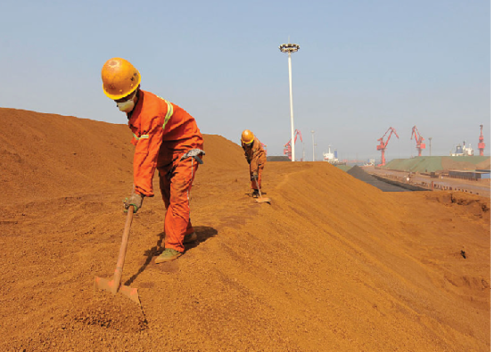 The COVID-19 situation in Mongolia remains fragile and subject to rapid change despite a widespread vaccination program. OT LLC is constantly adapting to the changing circumstances to prioritise the health and safety of its employees.

During the first quarter 2021, the Oyu Tolgoi underground project was impacted by COVID-19. Measures implemented by OT LLC including restrictions on travel from Ulaanbaatar to the site, have significantly impacted the number of workers that remain on site to continue underground development.

Turquoise Hill expects that COVID-19 restrictions will continue to impact underground construction and development in the second quarter 2021 and is working with OT LLC and Rio Tinto International Holdings to monitor and assess the situation.

On 9 April, Turquoise Hill announced that it has reached a binding agreement with Rio Tinto on a funding plan to complete the construction of Lift 1 of the Oyu Tolgoi underground project, including Lift 1 of the Hugo North Extension deposit on the Entrée/Oyu Tolgoi JV Property. Successful implementation of the Heads of Agreement is subject to achieving alignment with the relevant stakeholders in addition to Rio Tinto (including existing lenders, any potential new lenders and the Government of Mongolia), market conditions and other factors.

Achievement of the technical criteria required for a mid-2021 commencement of the undercut on the Oyu Tolgoi mining licence remains on track. However, the exact timing of the undercut is under increasing pressure due to the rapidly evolving recent COVID-19 impacts. Non-technical criteria, including confirmation of necessary regulatory and legislative approvals required by the Government of Mongolia are still pending and are critical elements for consideration to proceed with the decision to commence the undercut. Turquoise Hill is working with OT LLC and other stakeholders to ensure that important aspects for a successful project are met prior to commencing the undercut.

Ongoing work suspensions continue to affect progress on Shafts 3 and 4 and the overall impact of these delays is under review. Progress remains dependent on mobilizing key vendors and additional sinking resources into country and cleared from quarantine. Additional shaft sinking specialists are in Mongolia and were expected to arrive on site in May. 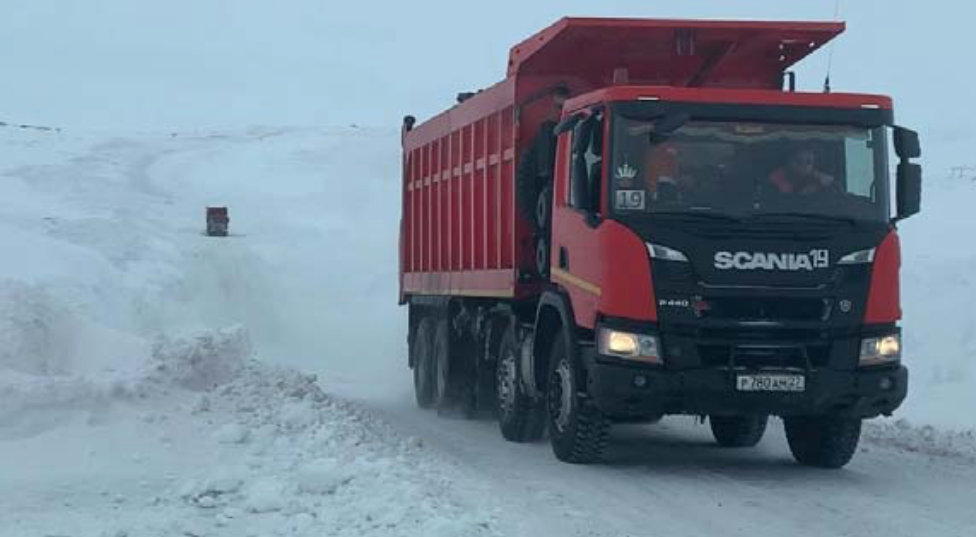 During the March quarter, Tigers Realm Coal (TRC) mined 208 kt of ROM coal and delivered 62 kt to Port. 146 kt was hauled to TRC’s intermediate stockpile near the location of the future Coal Handling and Preparation Plant (CHPP.) The decrease of coal mined compared to the December quarter was due to severe weather conditions in January, February and March, including snowstorms and strong winds. The quarterly average stripping ratio decreased from 5.3:1 in the December quarter to 3.7:1 due to concentrating our mining activities at Seam 3.

CHPP works are continuing on schedule. The CHPP equipment was expected to be in Vladivostok, Russia, for customs clearance by the middle of May. Detailed engineering works and preparation for civil construction are well underway.

During the March quarter, TRC started preparation for the 2021 shipping season, including maintenance of the conveyor and loading system in the port, initial dredging works as well as the necessary minor repairs on the fleet and cranes. Most port personnel started to arrive in Beringovsky in April.

During the first quarter of 2021, sales activities were confined to booking one vessel – a 100-kt geared ice class vessel for H2 May loading, and one sale into China of T1 thermal coal (for the above cargo). This vessel should set a new record for both vessel and cargo size at TRC’s port of Beringovsky.

The Asian coking coal market remains severely disrupted by the Chinese import ban on Australian coal. This has changed seaborne trade flows for coking coal and effectively split the market into two segments with two different price structures – China (the non-Australian Supplier’s Market), and the rest of the world (where Australian coking coal is in oversupply). The main beneficiaries of this situation are Indonesian and Russian coal suppliers operating through east coast ports.

The Chinese spot metcoal market has been very strong for U.S., Canadian and Russian coal, with recent CFR prices around $220/t whereas the rest of the world has seen weaker pricing. Prices for Peak Downs, the Australian benchmark coking coal, have been rangebound between c. $100-$110/t FOB all year.

In thermal coal markets, Q1 2021 prices bounced back strongly on winter demand in China, which faced some of its coldest weather in many years, compounded by supply chain disruption in Indonesia due to heavy rain and tightness created by the Chinese demand for non-Australian coals.