The mining industry is significant to Indonesia’s economy overall, with an economic contribution of between 4% to 6% of GDP. 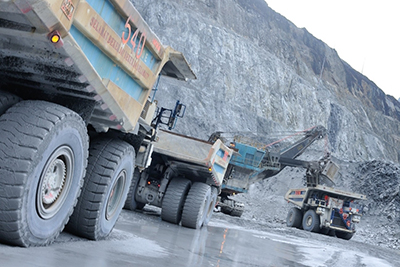 Indonesia is one of the world’s largest exporters of thermal coal, and a significant producer of copper, gold, nickel, tin and bauxite.

It is the location of the largest gold mine, second-largest copper mine, and two of the five largest coal mines in the world, measured by annual production.

The mining industry is significant to Indonesia’s economy overall, with an economic contribution of between 4% to 6% of GDP and a long-term status as one of Indonesia’s most consistent sources of inbound foreign investment and export revenue over the past two decades.

It has also served as a critical driver of economic activity in parts of the country with low overall levels of economic development.

The performance of Indonesian mining has fluctuated over time, with policy and regulatory changes contributing to a relatively high risk business environment. However, Indonesia has also improved its ranking in the World Bank’s ease of doing business index in recent years, from 123rd to 73rd between 2013 and 2019.

Over that period, Indonesia has been a challenging market for foreign investors into mining, and for those seeking to undertake exploration. However, it has remained a profitable and growing market for a wide range of operators, and for the ecosystem of METS providers.

Within the market, the Grasberg copper/gold mine has a unique status, as the largest mine in the country, a significant underground operation in a market dominated by open pit mining. In 2018, it was one of the first foreign owned and operated mines to transition to majority Indonesian ownership.

According to a Government of Western Australia report, beyond commodity price movements, there are a number of trends that have been transforming Indonesian mining over recent years.

The push for domestic downstream processing
Indonesia’s authorities have implemented a number of policies aimed at increasing the downstream processing of commodities in Indonesia. This has included scheduled bans on exports of some unprocessed commodities, including nickel and bauxite. While there have been inconsistent approaches to implementing the policy, there has nevertheless been large-scale investment in smelters and related downstream infrastructure.

Quality still counts, but competition has increased
METS companies previously in the “high-quality” market competing against international peers, now face a more competitive environment. The most successful and profitable METS companies established in the market have restructured their operations to maintain their equipment and services at these lower price points.

The market for relatively undifferentiated equipment and services is now heavily commodified and is supplied intensively from both domestic and low-cost providers from across Asia.

There is a growing niche for highly differentiated and innovative METS companies, working with the most sophisticated customers in the market.

Increasing standards, increasing innovation – but only for some operators
There are two key drivers behind an increased focus on safety, improved operations management, training and environmental performance in Indonesian mining.

The first is that those operating to an international standard are improving their Indonesian operations to align with their increased internally driven performance objectives. This is driving significant improvement projects at a number of large operations across key commodities.

The second is the rise in Indonesia’s own domestic standards and those of its leading players. This gradual improvement is supported by stronger safety and environmental regulation and enforcement, competition for talent and recognition of the positive impact on operations and profitability.

When combined, these account for only a minority of Indonesian mining projects. However, they represent a sufficient and growing market for Western Australian METS companies.

MIND ID (formerly the Inalum Group) has emerged as the lead SOE for Indonesian mining generally, with a clear role as Indonesia’s national champion mining company. This enterprise is seeking a strong position across the breadth of Indonesia’s key commodities, with strong ambitions across downstream processing, research and development and the adoption of best practice for mining safety, operations and environmental performance.

As a result, it will be increasingly important for Western Australian METS companies to be equipped to work with SOE mining entities as well as private sector operators.

Divestiture and the decline of the contract of work regime
The 2009 Mining Law saw Indonesia move away from its long-established Contract of Work (CoW) and Coal Contract of Work (CCoW) regime, under which terms were set, including taxation, for the full duration of the project – typically 30 years.

In recent years, a wide range of foreign-owned mines have transitioned from CoW to Special Mining Business Licences (IUPKs), which include a requirement to divest 51% of equity to Indonesian ownership. This has triggered changes in the ownership of significant mines and the partial or total exit of a number of foreign miners, including several from Australia.

Community engagement and development
Since 2009, all mining companies have legal obligations for community development and empowerment as part of their licence to operate. Some of these programs, such as those operated by Freeport Indonesia or Vale Indonesia are significant in scale, supporting the development of whole communities across health, education, infrastructure, environmental management and economic and social development.

Effective and outcomes-oriented community engagement and development remains a strong area of interest for the wide range of companies with these obligations.

Exploration activity
Mining exploration in Indonesia has historically been funded mostly by foreign capital. However, a range of regulatory and market issues have led to a decline in exploration from its peak of US$450 million in 1995 to less than US$100 million annually today.

As exploration activity continues to decline, there is a growing need for a policy response that better supports exploration. However, the recent revision to the 2009 Mining Law includes a firmer obligation on mining companies to conduct (and provide a budget for) increased exploration activities each year.

Reform and standardisation of regulatory approvals
In 2018, the Indonesian Government launched its Online Single Submission (OSS) service, after several years of development.

This service integrates the issuance of permits from all levels of government, through a single online registration process. Importantly, this includes many of the permits required for business establishment, operation and imports.

These initiatives are a work in progress. A range of permits and licences in the mining sector remain in parallel approval processes through the Indonesian Investment Coordinating Board (BKPM).

In practice, Australian METS companies continue to face regulatory uncertainty in obtaining permits and business licences, particularly local and regional supporting licenses. However, the OSS does demonstrate a genuine commitment to streamlining and improving transparency in this area.

This trend has continued through the latest changes to the 2009 Mining Law in which all mining licensing authority has been transferred to the central government and out of the hands of the relevant governors.

Use of expatriate employees
Over the past five years, it has become more difficult for Australian METS companies to employ expatriates in Indonesia.

In addition to the formal rules outlining the specific position titles available to expatriate employees, ratios of local to expatriate staff and knowledge transfer requirements, the time and compliance cost in this area for foreign companies has increased substantially.

It is increasingly common for relatively large Australian METS companies to have only a few or no expatriate staff in Indonesia, given the compliance requirements and the delays in obtaining local work permits (KITAS), or in finalising business establishments with large numbers of foreign employees.

As a result, Indonesia now has among the lowest level of expatriate employees in the region, reported by the Indonesian Government to be less than 0.1% of the population, compared to Thailand (~5%) or Malaysia (~14%). However, there is still a relatively clear and simple process to seek and obtain work permits for expatriates who are appointed as directors (rather than employees).