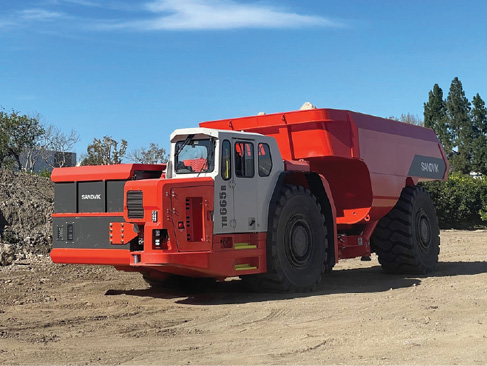 The unveiling comes just months after the OEM introduced its TH550B 50-tonne BEV at MINExpo International in September 2021 in Las Vegas, when the company said it would be expanding its BEV lineup for trucks and loaders.

A prototype of the TH665B is in factory testing now in California and will be trialed at the Sunrise Dam gold mine with Barminco and AngloGold Ashanti Australia. Commercial production is expected to begin for the machine in late 2023.

The new release, engineered to improve productivity, sustainability and cost efficiency in bulk mining operations, puts together Sandvik’s design and technology alongside electric drivelines and battery systems. Because of its efficient electric driveline, the OEM said a fully loaded TH665B is projected to be up to 30% faster on a 1:7 ramp compared to conventional diesel-powered underground trucks.

“Each of the truck’s four wheels is equipped with independent drives, resulting in a simpler driveline, improved overall efficiency and maximum power output. The Sandvik TH665B electric drivetrain delivers 640 kW of continuous power, enabling high acceleration and fast ramp speeds,” Sandvik said of the truck, which is also equipped with Sandvik’s patented self-swapping system, including the AutoSwap and AutoConnect functions for quick and easy battery swaps.

The Sandvik TH665B also has a new battery lifting system for improved reliability, it said, and a redesigned battery cage designed to improve serviceability and enable battery module changes without removal of the pack.