When it comes to staying on track, the K-Commander series from Kinder Australia has a solution for any application of material transportation. A poorly tracked conveyor belt can lead to a number of productivity and safety issues. 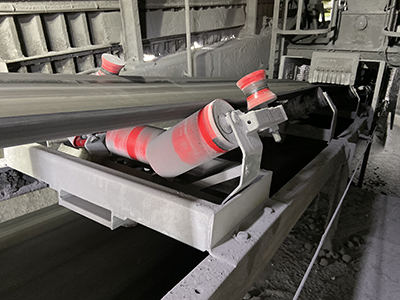 Another issue as a result of belt misalignment is often material spillage. As well as the cost of product wastage, excess material can increase the risk of personnel slipping, tripping, falling over and becoming entangled. Material spillage can also damage idlers and can cause conveyor rollers to seize.

The ideal scenario whereby a conveyor belt tracks “true” in the centre, involves idlers and pulleys being aligned, levelled and square to centre line prior to loading the belt. It should be pivoting and rotating freely when the belt experiences any mistracking behaviour. Other options include fixed tracking solutions without rotating structure. In order to install any one of the K-Commander series, the belt needs to be monitored in order to identify any problem areas that cannot be solved by making adjustments.

The K-Commander Exceed Series P has been designed with two key stages. The first stage focuses on the inner shell which contains the shaft and an engineered pivoting bush allowing the axial movement of the tracker. The inner shell is protected by a flexible EPDM rubber boot. The second stage focuses on the roller bearings, which allows the rotational movement of the tracker. The roller bearings connect the inner shell and the outer shell and are protected by a labyrinth seal.

The installation of the K-Commander Control Series is only for the return side, being the most critical surface of the belt in order to maintain belt alignment. The unique engineered action of the central ball and socket link is encased in a rubber covered steel tube. This protects the internal mechanics and ensures that the belt runs true.

The K-Commander Direct Series are a pivoting base style, available in both trough and return applications automatically providing belt centring. The outboard servo rollers cause the idler frame to pivot as they contact the belt edge and this swivel action causes the belt to realign automatically. To further aid belt tracking, Kinder Australia offer rubber lagged rollers (trough and return) as an option for your belt tracker. The results are better tracking performance (especially in heavy duty applications), Increased roller durability against the constant scuffing nature roller shells in trackers experience and increased belt training response.

Made of highly wear-resistant polyurethane, the K-Commander Tracking Discs fit both flat and vee return rollers as well as selected troughing rollers. Ideally, they are located in pairs prior to the tail pulley to help align the conveyor belt, and so eliminating spillage from mis-tracked belts. They can also be installed after the feed area on troughing sets to help keep the belt aligned. They are easy to install with a split on one side to slip over the roller – no need to remove the roller.

Finally, the K-Commander Guide Series INV is an all-purpose conveyor belt alignment idler ideally suited to short centred or reversing conveyor applications. The two inverted vee rollers put pressure down onto the belt, promoting centralised belt training. The universal frame adjusts to all types of mounting structures and is installed just after the head pulley, or prior to the tail pulley. They are suitable for reversing belt and are available for all belt widths.