MINCOR Resources has embarked on a two-pronged growth strategy which will encompass nickel and gold development opportunities within the Kambalda district of Western Australia. Following the collapse in nickel prices and the resurgence in gold prices, Mincor intends to maintain its nickel assets while aggressively exploiting the gold potential of its landholdings.

The company’s land position near Kambalda is a world-class nickel district and the heart of the Eastern Goldfields. The first part of the strategy requires maintenance of existing nickel assets while reducing their holding costs to an appropriate level and at the same time enhancing their value by expanding the nickel inventory and further strengthening economics.

Mincor CEO Peter Muccilli says the core of the nickel option has been cemented following completion of definitive feasibility studies at Durkin North and Miitel deposits. The studies outline a base production potential from reserves of 28,200 tonnes of nickel metal.

“The nickel option is further enhanced by recent discoveries at Voyce and Cassini, known additional resources at North Kambalda, and the strong potential for new greenfields discoveries in the area. Mincor holds a strong and valuable option on a recovery in nickel prices.”

He says in parallel Mincor has identified an opportunity for near-term gold production based on gold resources identified historically but requiring upgrading to JORC 2012 compliance, as well as other gold prospects where it believes resources can be quickly and cost effectively established.

“These provide the potential for a series of shallow, easily-mineable gold pits, which would allow Mincor to take advantage of the current high gold price with the added benefit of offering significant resource upside. Initial scoping studies have commenced on two potential gold pits.

“The company has implemented what it believes to be an effective strategy to rebuild shareholder value following the closure of nickel operations earlier this year in response to collapsing prices. Our first objective was to minimise losses through an orderly and well-managed care and maintenance process, completing a wind-down of our existing production assets that had been in train for nearly a year.

“With that behind us, we now turn to the future and I believe we have a clear pathway to build significant value in the company, leveraging off our two key assets – our outstanding landholdings and our highly experienced and very capable team, which has a proven track record in developing and operating mines in Kambalda.” 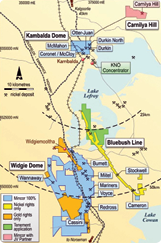 Mincor’s nickel and gold assets in the Kambalda district of Western Australia.