The industrial ecology of explosives will blow your mind

The point has been made in previous articles in The ASIA Miner magazine, that sustainable development cannot occur unless something happens in practice. Certainly, theory and research are fundamentally important but in themselves, they are ineffectual unless the results are used to change things for the better. 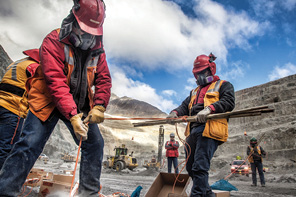 Sustainable development generally requires sound, appropriate information. Generating such information will likely be an enormously complicated task, even when it is seemingly quite simple. This is principally why a significant part of Industrial Ecology (IE) focuses on developing methods to generate information and on applying those methods to real-world situations. The process entails gathering relevant data, analysing them accurately and then generating from the analyses the information needed to address the issues of interest.

Depending on the purpose in mind, various techniques for producing information are used in IE. Materials Flow Analysis (MFA), and its close relation Input / Output analysis (I/O), attempt to assess the quantity and fate of resources flowing through a ‘system’ such as a factory, a mine site or an economy. The resources might be materials, energy or water.

For MFA, data are usually recorded in the dimensions of physical quantities, for example, tonnes, megajoules or kilolitres. For I/O, however, the unit of measurement is generally currency. In other words, the value of the resources being measured is used as a proxy for physical flows. Whether the proxy is reliable or not is debatable. Ultimately, what determines sustainable development is physical change.

Environmental Foot Print Analysis (EFPA), in its several different forms, yields information on how the environment is affected by human activities. They may be, for example, the effects of agriculture, urbanisation, transport, fishing or mining; considered at various scales and normalised to the uniform parameter of global hectares.

Other analytical techniques used in IE, such as Systems Analysis and Network Analysis, have been adopted from other disciplines.

No matter what type of analysis is used, deciding on the extent of the boundaries within which it is to be performed, the scope and scale of data required and the ‘externalities’ – that is data, features and characteristics to be excluded from an analysis – are vexatious considerations. Nonetheless, they critically influence the results.

Life Cycle Assessment (LCA) is a case in point and although subject to continuing theoretical development, it is now widely used in practice. It aims to assess the impact that the subject of assessment, for example ammonium nitrate fuel oil (ANFO), has on the environment during its journey, or some part of it, from ‘cradle to grave’ and perhaps beyond. As in similar types of analysis, LCA is used in relation to specific elements of the life cycle, such as the energy required, the water consumption or atmospheric pollution.

Mine workers might have occasionally marvelled at the effect of detonating ANFO, especially when ‘flyrock’ hits something it shouldn’t but, unsurprising, many in the mining industry will probably not have pondered the environmental impact of producing ANFO.

Most people are unlikely to think in such terms about items they take for granted in their daily lives, even if they were familiar with the techniques of LCA. As it turns out, LCAs of ANFO are rare. One done by GF Brent(1) is, however, a good illustration of the approach applied in practice. It assesses the greenhouse gas (GHG) emissions from the production and use of ANFO. The detail of greatest significance is the clear indication that the production of ammonium nitrate emits by far the most GHG, in the form of nitrous oxide (dinitrogen monoxide; N2O). This was also the conclusion drawn by Ferreira et at from a purely academic study in 2014(2).

The reason this is so significant is that the whole point of understanding environmental impacts is to work out how to eliminate them, or at least mitigate the damage they cause. In the case of ANFO production, the most effective way to do that is to tackle that part of its life cycle, which produces the most GHG. That is exactly what the explosives industry did. As Brent mentions in his article, abatement technologies were developed, based on various catalytic systems, which reduced N20 emissions by 99% of the levels before abatement.

There remains, however, the issue of dealing with the effects of using ANFO, which may be more intractable. They can occur after detonation (beyond their grave, so to speak) or result from poor or failed detonation.

Published research by Defence R&D Canada (3) gives a synopsis of these effects, most of which relate to the solubility of ammonia (NH3) in water, such as eutrophication and phytodegradation. Airborne pollution after an explosion, for example, red or yellow clouds, may seem to disperse rapidly but can seemingly have long-term consequences, like acid rain.

theory and research are fundamentally important but in themselves, they are ineffectual unless the results are used to change things for the better