The first article in this series presented an overview of industrial ecology (IE), the objective of which is sustainable development (SD). It ended with the question: what bearing could IE have on mining? This article addresses that question but first, some background.

THE strategies promulgated through IE are the foundation of its contribution to SD and only by deploying strategies in practice will SD become reality. The circular economy (CE) is one such strategy, which has been widely promoted by the Ellen McArthur Foundation. In theory, the materials in an industrialised economy and other resources must not be discarded at the end of their (first) economic life but returned (repeatedly) to the productive economy rather than being dumped. 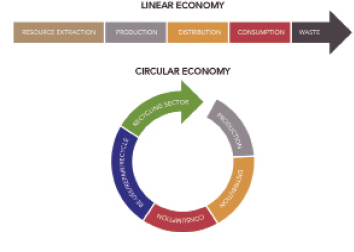 The focus of discussions about the CE has mostly been on processing discarded materials for re-introduction to the productive economy. Mining has rarely been mentioned in this context so, at first glance, one might think the CE is irrelevant in mining. There is, however, a contrary view - that the CE will eventually have a profound effect on mining of all sorts, except perhaps gold. Even mining for minerals that have burgeoning future demand such as lithium or neodymium will eventually wither.

Support for this prognosis relates to the notion of a linear economy, as depicted by the top diagram in the figure. The fundamental problem in industrialised economies is that materials are dug out of the ground, chopped down or otherwise plundered from finite natural resources. They are used in various ways to produce goods, usually requiring fossil energy in the process, and when their economic life has expired they are discarded, almost invariably in landfill. It seems reasonable that extracting materials and energy from finite resources cannot continue forever. Resources will eventually become exhausted economically, if not physically. The linear structure is simply unsustainable.

The premise of the CE is that instead of dumping goods and materials in landfill etc, they should be conserved as much as possible by returning them to the productive economy. This is basically the notion of the circular economy, as depicted also in the figure.

People typically refer to the CE as if the strategy were a single, ubiquitous, all-encompassing economic and physical phenomenon. In practice, the CE actually comprises many different initiatives operating at various scales and with substantially differing results. I suggest at least three distinct scales on which the CE is manifested.

Collaboration on a macro scale between regional governments like the EU, trans-national institutions such as the World Bank and attempts by national governments to establish the policies, legal structures, regulations, economic and social conditions necessary for CE to become pan-global business as usual. At a micro scale, corporations like Carlsberg in Europe and sub-national institutions such as state authorities instigate initiatives to create circular economies within their respective jurisdictions.

The mini scale is where local government authorities, community associations, charities and individuals make things happen - one way or another. By their very nature, initiatives will likely be localised but examples such as the Plastic Police in Newcastle, NSW or the Circular Economy Experiment in Maroochydore, Queensland show what can be achieved by highly motivated people, acting largely on their own initiative and with very few resources at their disposal. The great thing about the mini scale is that people can get involved with a CE at the ‘grass-roots’ level with a reasonable expectation of success. That notion might appeal to those in mining companies who want to make a difference, whether out on site or stuck in an office somewhere. How that might be done is for another article - first we should address the question of what has the CE got to do with mining?

Incredible though the answer might seem, it is that mining will probably not exist at all in the long term. Based on the inexorable argument that finite resources simply cannot be exploited literally forever, the whole purpose of pan-global CE is to conserve for repeated re-use the materials already above ground now and those that will be extracted in the future.

Depictions of the CE, on the web for example, generally show waste and other discarded materials returned to the productive economy downstream from extractive industries in the materials supply chain. The demand for metals and minerals may take several (human) generations to decline significantly but mining for energy will likely decline much faster as technologies are developed to convert energy from sustainable and renewable sources.

No doubt there will be many who utterly refute this prognosis. Nevertheless, trends of advanced economies are clear in real life. Proliferating wind farms and photovoltaic arrays covering many hectares or plonked on domestic roof-tops supply ever increasing demand for electricity.

What will be the demand for thermal coal in 30 years’ time? Commercial scale biological systems produce methane and ethanol fuel. What will be the demand for fossil fuels or any liquid fuel at all once electric motors replace the internal combustion engine? Will we still be using fossil resources as precursors for producing plastics when recent graduates entering the mining industry in 2018 start planning their retirement?

Clearly, the answers are unknowable now but what would be smart is to deploy the precautionary principle – just in case, and use IE to confront the challenge of insidious obsolescence. More on this topic in 2018.