ASIAN Mineral Resources (AMR) exceeded its 2015 production targets at the Ban Phuc Nickel-Copper Project. The operation milled 447,746 tonnes, which was 18% above the target for the year. 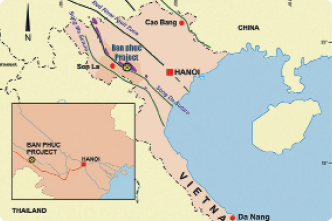 The Bun Phuc Nickel-Copper Project is in northern Vietnam, west of Hanoi.

There were no reportable environmental incidents and the safety performance exceeded the annual targeted 25% improvement in LTIFR.

The company completed all mined capital development scheduled in 2015 ahead of schedule while the tailings dam construction was completed for the full current life of mine.

AMR is confident of adding to the resource base of the project with ongoing exploration success at the nearby Kingsnake prospect. Geological mapping and trenching identified a 1.2km mineralized zone at surface with surface EM identifying the presence of EM conductors at depth.

“Despite the sustained drop in nickel price throughout 2015, increased production levels combined with our strong focus on efficiencies and cost reductions strategies enabled us to maintain cash flow going forward. At the same time, AMR remains committed to pursuing growth opportunities, on our near-mine exploration and regional exploration targets with a priority focus on Kingsnake where exploration activities remain ongoing.”

AMR commenced commercial production from its Ban Phuc project in mid-2013. The project currently produces more than 8600 tonnes of nickel and 4000 tonnes of copper per annum contained in concentrate, plus a cobalt by-product.

In addition to in and near-mine expansion projects, Ban Phuc provides a cash-generative operating platform from which AMR can continue to focus on developing a new nickel camp within its 150sqkm of concessions located throughout the highly-prolific Song Da rift zone.