THE recently completed feasibility study for the Frieda River Copper-Gold Project outlines a much larger-than-expected development with a $US3.6 billion cost. It contemplates a large-scale, open-pit mining operation feeding ore to a conventional process plant with nominal annual throughput capacity of 40 million tonnes. 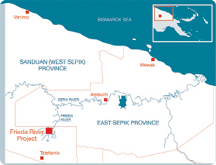 PanAust, a wholly-owned subsidiary of Guangdong Rising Assets Management Co Ltd (GRAM), has been working on the study since acquiring its interest in the project in August 2014. As manager of the Freida River Joint Venture and holder of an 80% stake, PanAust delivered the study earlier this year to partner Highlands Pacific, which holds 20%.

The study concludes that the project will have an estimated initial pre-production capital cost of US$3.6 billion, excluding mobile mining fleet and an oil-fired power generation facility. An additional US$2.3 billion will be spent over the life of the mine on development and sustaining capital.

The project capital cost compares with the US$1.7 billion estimate of the previous development concept announced by PanAust in September 2014. The higher capex reflects the larger production capacity, additional spending on waste and tailings management solutions and increased construction costs.

PanAust has estimated the updated project will generate a net present value (NPV) of US$820 million, using a discount rate of 7.8%, a copper price of US$3.30/lb, a gold price of US$1455/ounce and a silver price of US$23/ounce. The Internal Rate of Return for the project based on those parameters is 10.8%. This NPV is calculated from a start date of June 2018 when the project may commence construction.

The JV intends to use the study to support an application for a special mining lease, to be submitted to the PNG Government by June 30, 2016. The application process and associated community consultation and environmental studies are anticipated to take approximately two years. Following permitting, construction would take approximately six years, leading to potential production in 2024-25.

Highlands Pacific managing director John Gooding said the study demonstrated that there was significant potential value to be derived from the project under the right conditions.