ONE Asia Resources has updated a prefeasibility study (PFS) for the Awak Mas Gold Project in South Sulawesi. The revised PFS shows improved economics for the main deposit and two satellite deposits as well as material improvements in capex, cash cost and net present value (NPV). 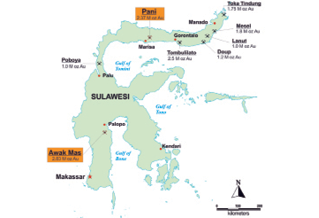 The two primary projects of One Asia Resources are on the island of Sulawesi.

The updated PFS is based on the same mine plan as the PFS released in March 2015. The project is held by One Asia under a seventh generation Contract of Work, which covers 14,390 hectares and allows for a construction period of three years and operating period of 30 years.

The revised pre-production capital cost is estimated at US$161 million, down from US$198 million in the previous PFS. Estimated C1 cash costs are US$496 per ounce, down from $565 and all in sustaining costs are US$535, down from $745.

The revised IRR is estimated at 49%, up from 34%. The payback period is year two of operations, which is one year better than the 2015 PFS, with a two-year mine construction phase.

One Asia says capital costs have been reduced owing to reductions in industry costs, particularly in a number of areas associated with pre-strip, earthworks and inputs for plant construction. Further reductions have been made possible through engagement with credible local suppliers, reflecting the significant fall in mining construction activities and equipment pricing since the 2015 PFS estimate.

Substantial savings from price reductions in major consumables such as fuel and cyanide and depreciation of the Indonesian Rupiah compared with the US dollar have been recognised.

Meantime, the alliance established with Provident Capital Partners in 2015 continues with its objective of resolving the IUP dispute over the Pani project. A court decision in January 2016 was mostly supportive of One Asia but appeals were subsequently lodged by both sides.