ARC Exploration’s joint venture partner at the Trenggalek Gold Project, PT Danusa Tambang Nusantara, is undertaking a diamond drilling program. The drilling is designed to test for mineralised extensions to parts of the large Sentul and Buluroto epithermal gold vein systems that were previously tested with scout diamond drilling by Arc in 2010/11. 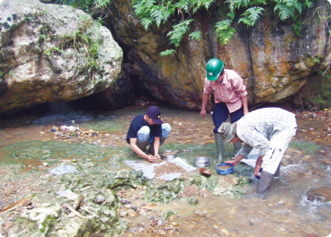 The program of at least 3000 metres began in February with 1443 metres completed in 10 holes during the March quarter testing northern projections of the East Sentul and Buluroto veins.

The Trenggalek Exploration IUP tenement is held by Arc’s Indonesian partner, PT Sumber Mineral Nusantara (SMN). The tenement, covering an area of about 300sqkm, is valid until November 2018. It is in the Southern Mountains of East Java which is an older segment of the Sunda-Banda magmatic arc.

This arc hosts several known large porphyry copper-gold deposits, including Tumpangpitu about 200km east of Trenggalek, and Batu Hijau and Elang on Sumbawa Island. Trenggalek contains a similar package of rocks to those hosting these three major porphyry deposits.

PT Danusa Tambang Nusantara, a subsidiary of one of the largest contract miners in Indonesia, is managing and funding exploration work at Trenggalek under an agreement that was announced last November. Danusa is funding the first stage of exploration for a total of US$1.5 million over 10 months and has the option to continue on to the second and third stages of exploration within a total framework of 30 months.

Initial gold results from the first five holes of the March quarter drilling have been received. Three holes were drilled at East Sentul and two at Buluroto. Two of the holes at East Sentul returned narrow, low-grade intersections while the other three returned no significant gold results.

Drilling is ongoing at Sentul while Danusa undertakes prospecting and mapping in areas to the southwest of Buluroto and Sentul for new epithermal vein and porphyry targets.

In an address to shareholders, Arc chairman Bruce Watson said the company had good points and challenges. “On the plus side we have our asset at Trenggalek in Indonesia. We have been successful in getting large companies to fund the real costs of exploration there, costs that we ourselves could never fund. Exploration continues funded by our Indonesian partner. They see in it what we do - an area with potential for a major copper and gold discovery.”