CHINA Gold International Resources Corp expects to complete stage two of the processing plant upgrade at the Jiama Copper-Gold Polymetallic Project in Tibet Autonomous Region during the second half of 2016. Total daily processing capacity will increase to 50,000 tonnes upon completion of the two-stage expansion. 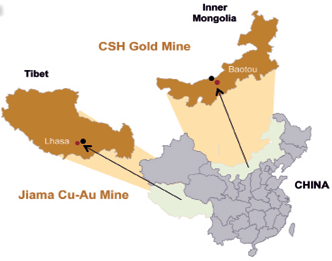 China Gold International has two projects in China – Jiama in the southwest and CSH in the north.

The stage one expansion, which will increase daily capacity from 6000 tonnes to 28,000 tonnes, has been complete and is being commissioned.

The company expects combined gold production of 235,000 ounces in 2016 from the Jiama mine and the CSH Gold Project in Inner Mongolia, and expects copper production of approximately 38.6 million pounds, or 18,000 tonnes, from Jiama this year.

It is continuing to leverage the technical and operating experience of controlling shareholder, China National Gold Group Corporation (CNG), to improve operations at its mines. In addition, it continues to focus efforts on increasing production while minimizing costs at both mines.

To fulfil its growth strategy, China Gold International is continually working with CNG and other interested parties to identify potential international mining acquisition opportunities, namely projects outside of China, which can be readily and quickly brought into production with the possibility of further expansion through continued exploration.

Cash production cost of copper per pound after by-products credits decreased by 15% due to a higher volume of by-product gold sold in copper concentrate during the period.

During the March quarter at CSH gold production decreased by 11% to 36,703 ounces from 41,033 ounces during the comparative 2015 quarter. The decrease is attributed to lower volumes and grades of ore mined.