ELDORADO Gold, the largest foreign-owned gold miner still operating in China, is exiting the country after agreeing to sell its three operating projects and one development project. The Canadian-based miner has been operating successfully in China for 11 years. 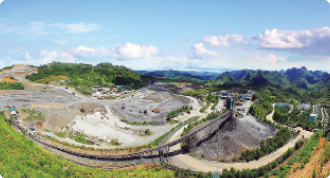 Eldorado Gold has sold the Jinfeng Gold Project to a subsidiary of China National Gold Group.

In April Eldorado sold its 82% interest in the Jinfeng mine to a wholly-owned subsidiary of China National Gold Group for US$300 million. Three weeks later it agreed to sell its 95% interest in the White Mountain mine, its 90% stake in the Tanjianshan mine and its 75% holding in the Eastern Dragon development project to Shenzhen-listed Yintai Resources for total consideration of US$600 million.

Eldorado, which also has gold projects in Turkey, Greece, Romania and Brazil, says it plans to use the proceeds to expand its business based on long-lived, low-cost assets. The transactions are expected to close in the third and fourth quarters of 2016.

Eldorado entered China in 2005 with the purchase of Afcan Mining, giving it the Tanjianshan mine that began production in November 2006. In 2009 it bought Sino Gold, giving it the operating Jinfeng and White Mountain mines. Tanjianshan is in Qinghai province, northern China, Jinfeng is in Guizhou province, southern China, White Mountain is in Jilin province, northeast China and Eastern Dragon is also in the northeast in Heilongjiang province.

Following the Jinfeng sale, Eldorado’s president and CEO Paul Wright said, “We are pleased to have reached an agreement which we believe mutually benefits both companies. China National Gold has been our minority partner at Jinfeng for more than 14 years and is the logical buyer as the operation transitions fully into the underground.

“Since production commenced in 2007, Jinfeng has consistently delivered solid operating results and has been a strong contributor in Eldorado’s global portfolio.”

Paul Wright said, “We are very pleased to have reached this agreement as this transaction recognizes immediate value to both companies and its shareholders. We are proud of our history and the accomplishments achieved by the hard work of all Chinese employees. The transaction provides Yintai the opportunity to build on our achievements in China.”

Yintai controls the Huaaobaote polymetallic mine in Inner Mongolia.