AN expansion of processing facilities at Erdenet Mining Corporation’s copper-molybdenum project in northern Mongolia has resulted in annual ore production increasing by six million tonnes to 32 million tonnes. The expansion was opened in May 2015 with commissioning completed by the end of the year. 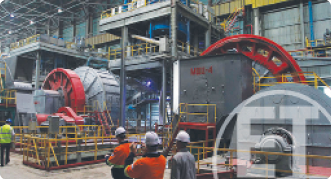 The expanded milling facilities at the Erdenet Copper Project in northern Mongolia.

Erdenet said the self-grinding section commissioning process was extended owing to the time taken to introduce equipment to the right technological mode and ensure stable operations, however adjustments were carried out according to plan. During commissioning the plant processed 750-820 tonnes of ore per hour, which was 95-97% of capacity. Automation works were implemented by specialists from BGRIMM and Erdenet.

The opening ceremony on May 20, 2015, was attended by more than 200 guests including President of Mongolia Mr Elbegdorj, officials from the president’s office, government, Ambassador of the Russian Federation to Mongolia Azizov Iskandor Kubarovich, Ambassador of Belarus to Mongolia Stanislav Vladimorovich Chepurnoi and Board representatives of Erdenet.

Erdenet was established in accordance with an agreement between the governments of Mongolia and the former Soviet Union, and started operations in 1978. It has established collaborations with mining experts from Phelps Dodge; Outokumpu Oyj, Finland; Bateman Engineering, Australia; Pacific Ore Technology, Australia; Brook Hunt & Associates, UK; KDEngineering, USA; Samsung Corp, South Korea and other companies.

The ore body of the copper-molybdenum deposit in the Erdenetiin-Ovoo stretches west to east. It is about 25km in length and 1.5km to 3km in width and consists of four main parts.

The company has set the following tasks in its strategic plan until 2020 - improve plant equipment; extend annual ore processing capacity to 35 million tonnes; reduce cost of unit product; and produce a final product with added value by introducing new techniques and technologies which are environmentally-friendly and energy saving.