SIGNIFICANT results have been received from follow-up drilling on the high-grade discovery at Erdene Resource Development Corp’s Bayan Khundii Gold Project in southwest Mongolia. The company expects to follow up the results with more detailed drilling during the September quarter. 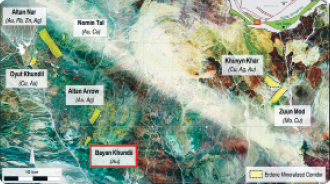 The results, which include 7 metres of 4.7 grams/tonne (g/t) gold within a 70 metre zone from 50 metres of 1.1 g/t, are from the second batch of nine holes for 835 metres in an ongoing expanded program of 30 diamond drill holes totalling 3825 metres.

Erdene’s president and CEO Peter Akerley said, “The Bayan Khundii exploration program continues to return impressive intersections of gold mineralization often coming to surface and that appear to extend below the current depth of drilling. The initial drill results provide continuity of mineralization in the Striker Zone, one of several targets now being explored over a 1.7km strike length.

“As we begin to test the boundaries of the main mineralized area, it is apparent that intense alteration associated with the gold mineralization is extensive and continues under surrounding younger volcanics.”

The 2016 drilling program has been designed to test both the continuity and extent of mineralization in the main zones, including the Striker Zone, and to explore the possible limits of mineralization.

Erdene is well financed to continue with an active field season as a result of a recent Sandstorm Gold financing and the exercise of warrants. It has also recently closed a non-brokered private placement with Teck Resources as part of a strategic alliance with Teck that covers exploration in the Trans Altai region of southwest Mongolia but excludes Bayan Khundii and the Altan Nar Gold-Polymetallic Project.

The placement realised proceeds of C$500,000 and fulfilled Teck’s annual equity investment obligation for the alliance. The 2016 exploration program will include surface geochemical sampling, geological mapping and prospecting, and analysis of new satellite data.