Nova development ahead of schedule


CONSTRUCTION at Independence Group’s underground Nova Nickel Project in Western Australia is progressing well with first concentrates expected in December 2016. The development remains ahead of schedule and on budget relative to the optimisation study schedule with commissioning to commence during the fourth quarter.

By the end of December 2015 the project schedule had reached the 60.7% mark. Total mine development of 2441 metres had been completed and the decline face was 1425 metres from the portal. Mine dewatering was also continuing as planned with water from the dewatering bores and the mine pumping system being discharged to the now completed tailings dam. 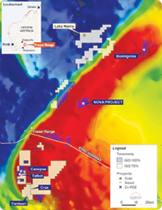 Construction of the process plant and its associated infrastructure was ahead of schedule at 31% complete. Some 3177 cubic metres of concrete had been poured with civil works being completed in the crushing and milling areas. The ROM bin retaining wall, crusher, conveyor CV01 and surge bin steel work was well advanced. Site fabrication of plant tankage commenced during December.

Factory Acceptance Testing of the copper filter was completed in December and factory QAQC inspections were completed for the flotation cells and thickeners. Progress of delivery of all other equipment was being monitored and remained on schedule.

Civil works for the construction of the power station commenced at the end of the quarter and power supply contractor Zenith advised that the Factory Acceptance Testing for the five power station diesel engines was completed in November.

Installation of the site overhead line power distribution system was 80% complete with the majority of the power lines installed and ready for connection. Work on the non-process infrastructure was progressing in accordance with the schedule.

An important milestone was reached on January 4, with the Department of Environmental Regulation granting a Works Approval to the Port of Esperance to ship the company’s product.

A positive optimisation study released in December 2015 has significantly enhanced the project value. It delivered a 36% improvement to the project’s NPV compared to the definitive feasibility study. The opportunity for an additional increase to the optimisation study NPV of more than 10% has been recognised and will be assessed further during the operational phase.

The study also revealed a 27% reduction in the expected Life of Mine (LOM) C1 costs in concentrate from $1.66 per pound of nickel to $1.21 while LOM all-in sustaining cash costs have decreased by approximately 21%.