AFTER a comprehensive review of project data highlighted substantial exploration upside, Western Areas Ltd has reopened the Cosmos Nickel Complex in Western Australia. The review, coupled with recent exploration activities, has reinforced the prospect for Cosmos to form the company’s second mining operation, along with the Forrestania Nickel Operation.

The upside is beyond Western Areas’ initial expectations at the time of the Cosmos acquisition last year. Managing director Dan Lougher said, “Having gained access to Xstrata’s full drill hole database after completion of the transaction, our exploration team has conducted an extensive and thorough geological review. This uncovered multiple significant high grade intersections at Cosmos that were not identified during the due diligence. The results, combined with our modern geophysical tools, are providing a strong basis for our high priority target generation program. 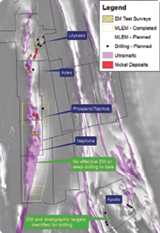 Prospects at Cosmos Nickel Complex, which is northeast of Western Areas’ Forrestania operations in Western Australia and 370km northwest of Kalgoorlie.

“At the same time, a small in-house project team has been formed to update the mining development study on the Odysseus deposit at Cosmos with the aim to bring the study up to Western Areas’ standards using our low cost operating model and current market mining costs.

“We anticipate that the study could be converted to pre-feasibility status later this year, and we are already uncovering areas where significant optimisation of capital and operating costs can be delivered,” he said.

Geophysical work has been completed testing a range of new electro-magnetic (EM) methods and technologies. The first stage of systematic EM testing of prospective stratigraphy identified an anomaly at Prospero, which will be drilled.

The company has planned a six hole, 7000 metre diamond drilling program to test a number of EM conductors for possible extensions to the Odysseus North deposit. There is also outstanding brownfields exploration upside at Neptune and Apollo. More than 500,000 tonnes of contained nickel in resource has been verified at Cosmos to JORC 2012 standards.

Meantime, at Forrestania during the December quarter mine production was 157,481 tonnes of ore at an average grade of 4.4% for 6917 nickel tonnes and Western Areas remains in line to meet full FY2016 guidance. Flying Fox produced 3183 tonnes and Spotted Quoll a record 3734 tonnes.