AFTER announcing an Aus$23 million fundraising package Geopacific Resources has stepped up exploration at the Kou Sa Copper-Gold Project in Phreah Vihear province. The company has added a third drill rig to extend its current campaign. 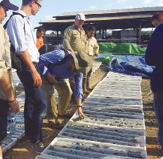 The RC rig has joined two diamond drill rigs that are onsite. It is initially being used to define the resource potential of the Prospect 128 area and will then be used for infill drilling at Prospect 150 and Prospect 160.

The ASX-listed company has also been involved in successful discussions with the Cambodian Electricity Commission (CEC) regarding the supply of power to the Kou Sa project. The CEC has confirmed that Geopacific will have access to national grid power via a new power line, which is under construction and scheduled for completion by the end of the year.

The line will run to a substation at the local village of Chheb that is 5km from the Kou Sa project in a recently completed bitumen highway. It will initially supply 33KV before being upgraded to 115KV next year.

The CEC has provided very competitive indicative pricing for the hydro-electric generated power. Building a 35KV line to supply power from the substation to the site is indicated at a cost-effective US$125,000-150,000 over the distance of 5km.

Geopacific says direct access to the national grid will provide significant operational cost reductions to production because the indicated costs are considerably lower than the cost of diesel-generated power.

The company’s managing director Ron Heeks says that the ongoing support from Cambodian authorities in assisting Geopacific to develop the Kou Sa project is reassuring. “Access to the national power grid will benefit the community and the project.”