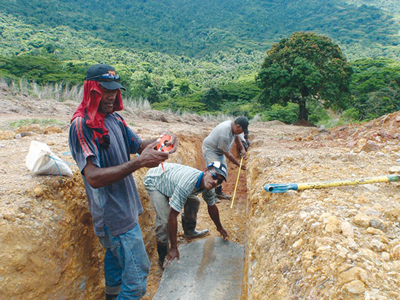 Geopacific’s managing director Ron Heeks says, “The grade and location of these new holes add early scale to the economic potential of our already impressive high-grade zones at Prospect 150 at Kou-Sa. One zone continues to produce a high-grade core within a very broad 40-plus metre zone of disseminated copper/gold mineralization while the other zone continues to confirm its more focused high-grade nature.

“Due to the shallower gradient interpretation, we now have about 150 metres of down-dip extent on the wider zone yet we’re still only 50 metres from surface. Importantly, the mineralization is continuous from surface and remains open in all directions.

“Our current understanding of the north-easterly dip means that some of the earlier holes were drilled in the footwall of potential target zones. This leaves the northern geochemical anomaly effectively untested.

“Our impressive success rate has already started to reveal the potential scale of Kou-Sa. The 150 Prospect which yielded these results is merely the first of several compelling targets within a cohesive 8km-plus arc which will be drilled by Geopacific during the 25,000 metre program.”

To date 18 diamond holes for 1796 metres and 16 RC holes for 1413 metres have been drilled at Prospect 150 Main. Drilling has considerably enhanced the company’s initial understanding of the geology and significant effort is being directed to understanding the multiple styles of mineralization present. There are three rigs operating on site with a fourth to start soon while a geophysical program is under way to assist in determining structure.

While copper is the most consistent metal present, the nature of mineralization is polymetallic with gold, copper, silver and zinc all associated with the chalcopyrite host mineral. The content of each metal in each zone varies considerably and the company says reporting a copper equivalent is the best method of summarizing the tenor of each zone.