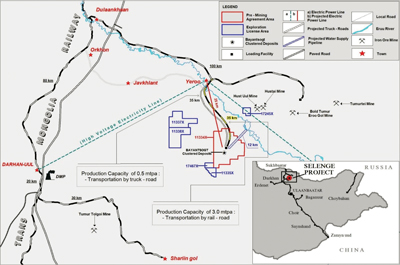 HARANGA Resources is continuing its transition from explorer to developer with its Selenge Iron Ore Project in northern Mongolia. As part of this process metallurgical test work is under way, the pre-mining agreement with the Mineral Resource Authority of Mongolia (MRAM) is signed, and a study for a start-up operation to achieve early production and cash flow is in progress.

As part of the test work, preliminary DTR with progressive grind test results demonstrates that a high quality iron ore concentrate is achievable as a final saleable product. The final results of test work at the ALS Technical Centre in Western Australia were expected to be delivered by the end of October. These results will define the nominal and design flowsheet for a potential processing plant.

The Selenge project holds Mongolia’s largest internationally recognized JORC-compliant resource of 245 million measured and indicated tonnes in three deposits – Dundbulag, Bayantsogt and Undur-Ukhaa. This equates to about 20% of the total registered iron ore resources in the country … and the project has further potential exploration upside.

It is also ideally located; has the right geological settings and structural zone; has availability to key infrastructure such as rail, electricity and water; and is in close proximity to existing producing iron ore mines with a track record of exporting to China.

The company’s 80%-owned Mongolian subsidiary Haranga Huder LLC, which holds the mineral exploration licence for the project, was awarded the pre-mining agreement which allows it to construct a mine after completion and submittal of a feasibility study together with a mine design.

Different scenarios of small and large scale production capacities as well as alternative transportation options (truck, rail and conveyor) are under detailed assessment. Pit design and Whittle optimizations to estimate mineable ore reserves and to delineate initial mining blocks are in progress along with a detailed study for a start-up/small scale mine operation to achieve early production.

Options being considered to start the initial mine operation are:

An exploration program focused on identifying high grade zones has also been approved by MRAM and the General Agency for Specialized Inspection. The first target is associated with the Bayantsogt magnetite skarn hill and lies within the structural corridor than contains the major iron ore deposits in the region.

Haranga has also been encouraged by recent amendments to the Minerals Law of Mongolia which have improved the mining environment in the country, resulting in the potential extension of exploration rights by a further three years until 2017.