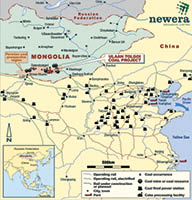 NEWERA Resources has obtained all approvals necessary to undertake a phase two drilling program within the northern sector of the Ulaan Tolgoi licence in the South Gobi basin of southern Mongolia. The northern sector of the licence was recently covered by a ground magnetics (GM) survey, resulting in the interpreted identification of two substantial sedimentary sub-basins.

A 600 metre diamond drilling program is being planned to test a number of coal prospective areas within the two sub-basins and Newera has received an all in quote of US$65,000 to complete the program.

Currently, inversion modelling of the GM data is taking place which should provide detailed imagery of the basement topography underlying the GM survey area.

Bright black coal has been discovered in a newly identified sub-basin within a third party licence immediately north of Newera's Ulaan Tolgoi licence and is interpreted to be in-places overlapping the Ulaan Tolgoi northern boundary.

The GM survey covered plus-700 line kilometres. The survey lines ran north to south in the survey area and were at an east west line spacing of 200 metres. The survey commenced on May 25 and was completed on time and within budget by mid-June.

Mongolian registered geophysical contracting company Geo-Oron LLC completed the modelling of the data collected and presented Newera with the final images and analysis of the most coal prospective areas.

Geo-Oron LLC was specifically selected by Newera for continuity of local knowledge, work practices and work quality, being the same geophysical survey contractors who recently conducted the ground magnetics survey immediately to the north of the JV Ulaan Tolgoi licence and who outlined the new black coal bearing sub-basin in that location.

Newera has now spent sufficient funds on the Ulaan Tolgoi project to be entitled to a 51% interest in the Mongolian company which holds the Ulaan Tolgoi licence as its sole asset, which means Newera currently holds a right to 51% of the project, earning up to 70%.