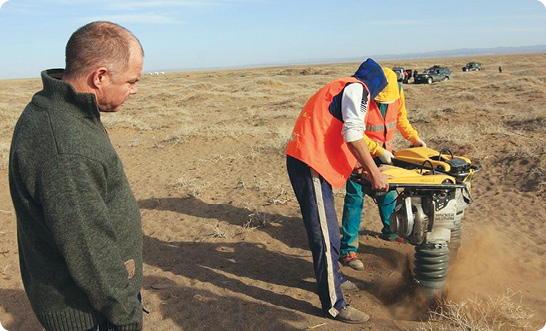 Ulaan Tolgoi is within the coking coal prolific South Gobi region, about 100km north of the Chinese border, 115km south of the plus-6 billion tonne Tavan Tolgoi coking coal mine and 150km west of the Oyu Tolgoi copper-gold mine.

The mini-sosie survey, which included final interpretations, was part of a limited work program carried out at Ulaan Tolgoi by consulting seismic geophysicists Logantek. Seismic lines A, B, D, E and F are interpreted to be underlain by potentially coal-bearing P2 Late Permian sedimentary strata while multiple, consistent, thick, gently folded seismic reflectors and interpreted to underlie these seismic lines.

In the opinion of Logantek, the reflectors are considered to be consistent with seismic reflectors from previous coal discoveries in the South Gobi basin, indicating a very good potential for coal. This basin is recognized worldwide as highly prospective in terms of the potential to produce very large coking coal deposits.

Lines E, B and F are all 2.5km-long in a south to north direction and indicate an east to west strike of at least 2km with the interpreted seismic reflectors being seen to be open to the east, west and north.

Line A, which is about 8km due west and interpreted to be along strike from line E, is interpreted to be underlain by about 5km of Permian strata along the line from south to north and also contains consistent thick, gently folded reflectors very similar to lines E, B and F.

The program will comprise up to 2000 metres of diamond core drilling and should provide a definitive test of the interpretations. In preparation, Newera has been granted all approvals required to commence drilling and a drill rig has been transported to within close proximity of the licence.

During March 2013 Newera entered into a binding MoU to work towards completing a formal JV agreement covering the 43,000 hectare exploration licence. Newera is required to spend US$200,000 before June 30, 2014 to earn a 51% interest and is well advanced in this process.