SUMATRA Copper & Gold is on track to complete the phase three drilling program at Tembang Gold-Silver Project in South Sumatra during the current quarter. The three-month program has the objective of defining additional measured and indicated resources. 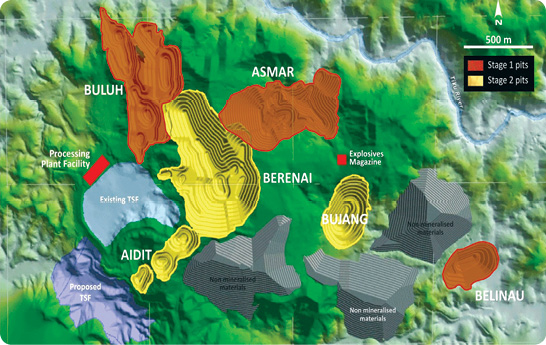 A plan for the Tembang Gold-Silver project showing the Stage 1 pits at Asmar, Buluh and Belinau, and Stage 2 pits at Berenai, Aidit and Bujang.

The successful addition of profitable ounces is expected to increase the debt-carrying capacity of Tembang, strengthening economics against gold price volatility and minimizing the need for additional shareholder dilution through a more substantial equity raise. The company says plans are well progressed to update mineral resource and ore reserve statements to be in compliance with JORC 2012 standards.

The company hopes the program will convert inferred resources into the measured and indicated categories at Asmar, Siamang and Belinau deposits. The program is also targeting the Tembang/Anang and Berenai areas with the aim of replacing historical RC drilling with diamond drilling.

Project construction activities were placed on hold last December while the additional drilling is completed. Sumatra remains confident it will be able to complete project finance activities once the new statements have been completed and a revised Life of Mine (LOM) plan is developed, supported by the project’s favourable economic parameters.

Sumatra Copper & Gold says the mining environment in Indonesia is being impacted by a number of legislative changes, exacerbated by the upcoming Presidential elections planned for later this year. While this negative sentiment has potential to affect all resource companies operating in Indonesia, it is important to note that these changes are expected to have a negligible effect on Sumatra’s Indonesian operations.

It says the project is designed to produce a gold-silver doré to be refined in Indonesia to an LBMA standard for gold and silver, thereby excluding the operation from current issues associated with the domestic value-add debate. Secondly, Sumatra’s three largest shareholders, who collectively own more than 51% of the shares, are all Indonesian.

The total estimated capital costs to achieve full production has been revised to US$71.1 million, compared to US$68.1 million in the original 2012 definitive feasibility study.