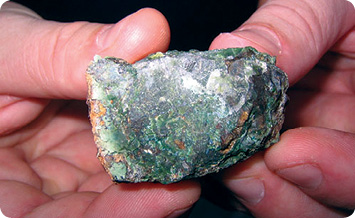 A mineralized sample from the Agata Nickel Project in northern Mindanao.

The results confirm excellent leachability obtained during bench-scale testing with 93.5-94.5% nickel extraction obtained over the two-stage leaching process. There was also favourable acid consumption in the range of 48-50t acid/t nickel leached.

Vendor test work is complete and all design parameters have been obtained for pre-leach thickener, counter-current decantation and residue filtration design. TVI’s Philippine pilot plant has since been commissioned and production of Nickel Hydroxide Product (NHP) was due to commence by the end of October.

The BGRIMM pilot plant operation was conducted from May to July and the results were encouraging and in line with expectations as obtained from positive bench-scale test work. Approximately 8000 litres of the nickel-rich liquor from the BGRIMM pilot leaching plant was shipped to the Philippines for feed stock to the TVI nickel purification and recovery pilot plant, established to produce an NHP containing about 50-53% nickel.

Some of this liquor was also tested at BGRIMM in a continuous pilot plant campaign configured to produce a Mixed Hydroxide Product (MHP) containing at least 36% nickel. This will allow TVI to evaluate the process option of producing MHP compared to NHP.

TVI and Mindoro have signed four JV agreements relating to the Agata and Pan de Azucar projects on the islands of Mindanao and Panay, respectively. The joint ventures allow TVI multiple growth opportunities for near-term and medium-term cash flow generating potential. Under the agreements TVI has the ability to earn up to a 60% interest and will act as operator of the projects.

Receipt of the certificate confirms the company has satisfied requirements of Presidential Decree 1586, and its issue comes upon recommendation of the Environmental Management Bureau. This marks a milestone towards starting development of the Balabag project, to commence pending approval of the Declaration of Mining Project Feasibility (DMPF) by the Philippines Mines and Geosciences Bureau (MGB) of the Department of the Environment and Natural Resources (DENR).

A mineralized sample from the Agata Nickel Project in northern Mindanao.